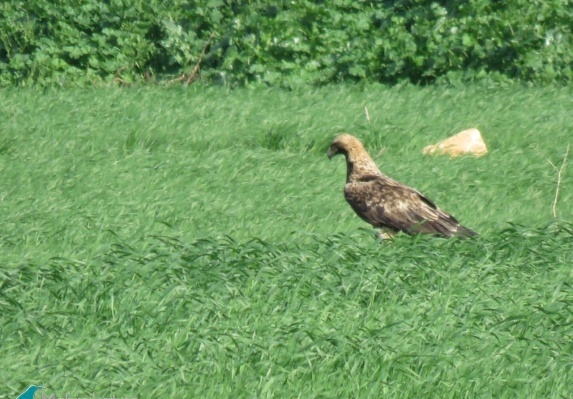 One of the largest and rarest Eagles in Palestine is the Eastern Imperial Eagle.

The Imperial Eagle is large and heavy with a wingspan of 190-210 cm, broad square wings and a relatively long tail. In flight,  it holds its wings straight or slightly towards the ground. Bill is heavy and thick and has yellow cere.  Like all other true Eagles (Genus Aquila), it has "long trousers" – feathers covering its legs all the way to its toes.

The adults are brown with distinctive white shoulders, seen usually on flight. Crown and nape are golden brown, contrasting to the dark brown head and body. Sometimes they can show  white under tail coverts. The young birds are sandy colored all over and streaked dark on the chest. In flight shows dark outer primaries with light inner primaries, creating a light "window" in the wing. The female is 10% larger than the male.

The Imperial Eagles breed in high altitude forests and on trees in steppe and agricultural areas between the Balkans and central Asia. Winter is spent in Africa, Middle East, India and China. The world population is estimated at 3000-10000 individuals and it's declining due to habitat degradation, shortage of nesting trees, collision with powerlines and electrocution.  Conservation efforts in the Balkans, Hungary and Slovakia managed to stabilize the European population but in the rest of its distribution range it is declining sharply.

The Imperial Eagles lay 2 eggs but when they hatch the adults will feed only the stronger chick and let the weaker one be eaten by its brother. This phenomenon is called "Cainism" and is known to occur in large Eagles, some Storks, Herons and Crows.

Conservation status in the world: Vulnerable. In Europe: Endangered.