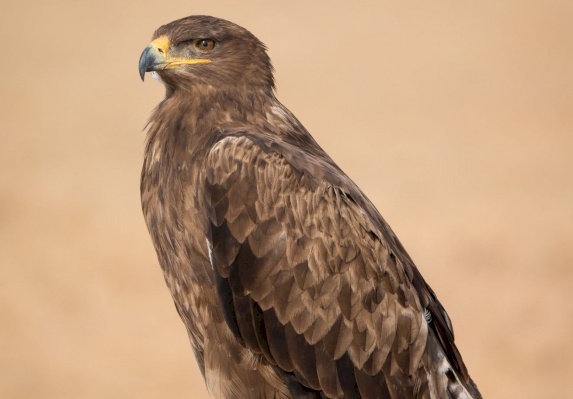 The Steppe Eagle is a migratory raptor who is closely related and similar in appearance to the other Aquila eagles. Lesser Spotted Eagles, Greater Spotted Eagles, Imperial Eagles, Booted Eagles and Bonellis Eagles are all Aquila eagles that are seen in our region and can be easily confused with the Steppe Eagle. Juvenile Steppe Eagles can usually be identified by a broad white band along the greater coverts of the underwing while adults can be identified by a dark trailing edge on the underwing.

It is a large dark brown eagle, up to 82 centimeters in length with a wingspan that can reach 2.15 meters. It generally weighs between 2-4 kilograms but the slightly larger females can reach 5 kilograms. It has a rufous colored nape and neck with a pale throat. It's bill is long, strong and hooked at the end with a yellow cere and long gape. Its plumage varies with age and between individuals but there is no difference between the sexes except that females are generally larger.

The Steppe Eagle is a relatively abundant Old World eagle that breeds in mountainous regions, grassy plateaus and semi-arid areas from central Romania through to Mongolia.

The eastern subspecies n. nipalensis will winter the India Pakistan region while the European/Central Asian subspecies n.orientalis spends its winters in mountainous and savannah regions of Africa.

Non-breeding birds may pass through as late as mid-May and only small numbers of birds are seen during the autumn migration or wintering in the region (fairly rare). These eagles will arrive in their breeding territories by late March and pairs will build a large platform of twigs on the ground, generally from a point with good views all around. 1-3 eggs are laid and incubated for a period of 45 days. The success of breeding is often dependent on the availability of their favorite food, the Little Ground Squirrel.

They are known to eat fresh carrion and steal from other birds but are good hunters catching small rodents, birds up to Partridge size, reptiles and crickets. Food can be stored in the crop in it's throat for several hours. While there is still a substantial and healthy population of Steppe eagles, they face the threats many eagles face.

Loss of habitat, dwindling food sources, powerlines, wind-turbines etc are all taking their toll. The drug Diclofenac is also a major problem in the eastern subspecies.

It's conservation status is currently Endangered and the population is being monitored for possible deterioration.

Status in Palestine A rather common migrant in spring and scarce in autumn.