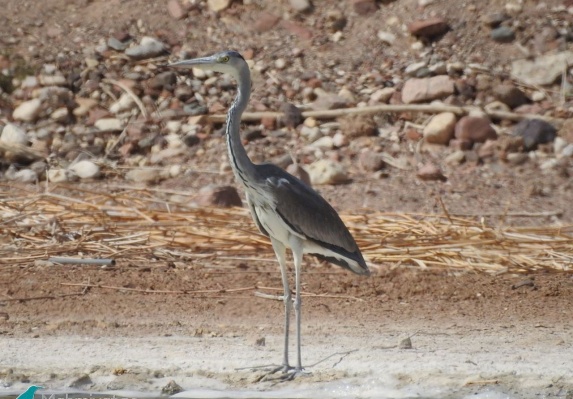 Description: The grey heron is the largest heron to occur within the region. The upper parts, the neck line and the bottom of the wing are a uniform grey. This contrasts with the darker primaries and secondaries of the wing. The belly, breast and neck are white with the head. Sexes are similar with juveniles being a more uniform grey around the head. The black plume above the eye is developed during maturity, usually after two years. The beak and legs are a yellowish-grey (more grey in juveniles). The beak is straight, strong and dagger-like. Wings are broad and flies with very deep, slow, somewhat irregular wingbeats. Wings are strongly arced downwards.

Distribution in the country and worldwide: Widely distributed and breeds across large parts of Europe, Asia and Africa. Euoprean populations winter in Africa and the Middle East. The population of Eastern Europe is approximately 200,000 birds and is likely to rise (Wetlands International, 2012).

Habitat: The grey heron is found around most waterbodies including ponds, lakes and reservoirs, rivers and streams, agricultural fields and flooded winter pools.

Behaviour: During migration Grey Heron will fly in a V-formation the same as the pelicans. A significant portion of the migration occurs at night where you can often hear them calling to each other. They can be soaring on migration, using thermals to increase their altitude.

Breeding/mating (season, how and where): Although Grey Heron is an extinct breeder in the region, it would nest in tall trees near water, usually in colonies but can be found individually.

Threats and hazards: The grey heron was hunted in Europe in large numbers in the 19th century by fisherman and owners of fish farms. The destruction of wetlands, deforestation and the use of pesticides is also a factor. The grey heron is a bird that may be affected by avian influenza if there would be a future outbreak of the disease.

Similar species not to be confuse with: Could be confused with cranes and storks in flight but these species fly with a straight, outstretched neck. The Grey Heron flying with a neck folded back into an S shape. Purple heron is a smaller finer bird with brown and purple feathers. Wings are slightly thinner in flight.

Cool facts: In the 16th and 17th Century, the hunting of grey herons using peregrine falcons was a sport carried out by Kings and Nobleman. In Scotland, the grey heron was considered the private property of the king so anybody found hunting them was sentenced to an amputation of one hand.