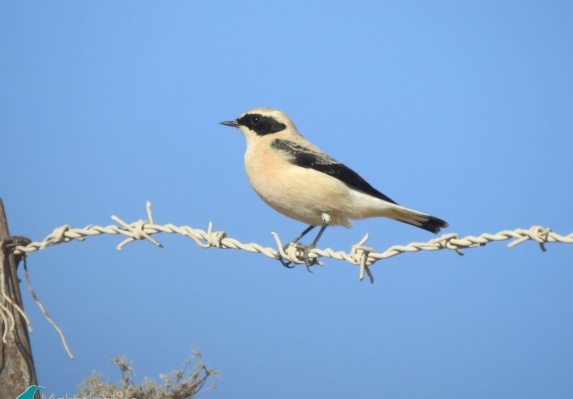 Physical characteristics: Length: 13.5-15.5 cms. Weight: 13-21 grams The males have white (or yellowish) crown, back and abdomen. The wings and cheeks are black as is the throat of some of the males. The space separating the black of the wing from the black of the throat distinguishes this bird from the males of similar species. The female is a fairly uniform brown color, especially in the fall. In the spring and summer some have dark cheeks and throat similar to the coloring of the male.

The tail of both genders is white with black center feathers and black terminal bar that is thinner near the center of the tail and wider at the sides (a reversed T).

In flight, the light back and dark underwing in the males are apparent, distinguishing it from male Mourning Wheatear, Pied Wheatear and Cyprus Wheatear.

Behavior: The flight of the Black-eared Wheatear is undulating and usually serves to "jump" from one lookout point to another, to catch insects in flight or on the ground.

This is the only wheatear that spends the summer and breeds in this area.

Habitat: The Black-eared Wheatear stands out in its preferred habitat of arid scrublands and rocky mountain slopes, due to its territorial behavior and the black-white contrast of its plumage.

Vocalization: During the courting season the males will sing from a lookout point on a rock or in a butterfly-like display flight.

Distribution: This wheatear breeds in the region of the Mediterranean Sea, including southwestern Africa, southern Europe, the Middle East through to Iran and Kazakhstan in southwest Asia. All the populations migrate and winter to the Sahel south of the Sahara Desert. The European population has shown a slight decrease (10%) since 1996 (Birdlife International 2008, EBCC 2012). A rapid population decrease has been noted in our area since the beginning of the 2000's. Once a common summer inhabitant, it has become a rare breeder.

The development and changes in its habitat, forestation and settlement, have taken their toll, as has the desertification and over-grazing in its wintering habitat and along its migratory route.