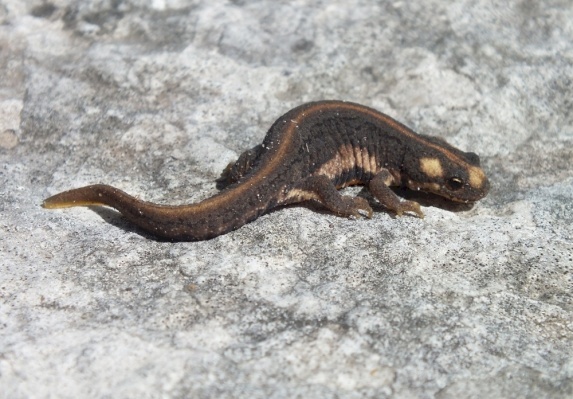 The Spotted Newt belongs to the Salamandridae family in the Caudata (tailed amphibians) order. It is the only species of its family present in Palestine, reaching a maximum total length (body + tail) of 12 cm. The Spotted Newt goes through an annual cycle, in which it has a terrestrial phase (summer and autumn, hidden under rocks when pools dry out) and an aquatic phase (winter and early spring, living in temporary water pools). During the terrestrial phase, males and females both look similar and may be mistaken for lizards. However, during the aquatic phase, both sexes grow fins and the toes become webbed (for swimming), the males possessing a much more elaborate crest structure and coloration as part of the courtship strategy. The diet of the Spotted Newt consists of invertebrates, mainly insects. Not much is known about their habits during the terrestrial phase – the phase that spans most of their lives. Courtship and mating occur in water pools during the aquatic phase. After an elaborate courtship ritual, the male deposits a sperm sac (spermatophore) that is collected by the female into her vent, fertilizing the eggs internally. Larvae hatch from these eggs, and metamorphose into newts within 3-12 weeks. The Spotted Newt inhabits Turkey and parts of the Middle East.

In Palestine – Sporadic, rare, in some Mediterranean aquatic habitats.