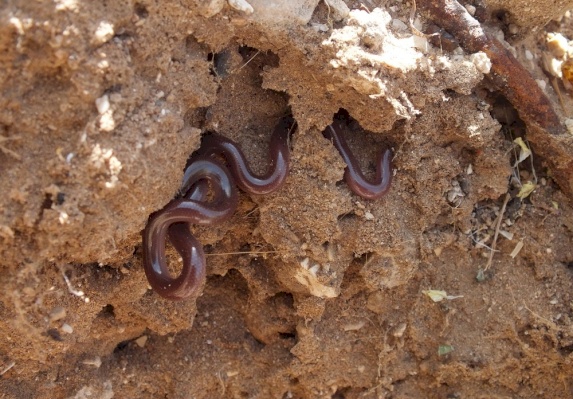 The Eurasian Worm Snake belongs to the Typhlopidae family in the Ophidia (snakes) sub-order of the order Squamata (scaled reptiles). It is largest of the three wormlike snake species present in Palestine, reaching a maximum total length (body + tail) of 40 cm. The Eurasian Worm Snake spends most of its life underground, burrowing in soil and into ants' nests. Over eons of evolution it has effectively lost its eyesight, its eyes are poorly developed and are covered by skin, and it barely has enough of its vision left to distinguish light from dark. The name Worm Snake stems, of course, from its resemblance to a worm. Another common name for this snake is "Blind Snake", due to its poor vision. It is very similar in appearance to the Beaked Blind Snake, and to the Simon Worm Snake; but in the Eurasian Worm Snake's mouth is not beak-shaped in profile, nor does its head look pointed from above. The coloration of the Eurasian Worm Snake is the most variable of the three wormlike species of Palestine – from light pink, through tan or light brown, or as dark as eggplant. The diet of the Simon Worm Snake consists of ant eggs, larvae and pupae, and perhaps also of termite eggs, larvae and pupae. They are often found under rocks near or inside the tunnels of ant or termite nests. It is oviparous (the young hatch from eggs), but this is the only knowledge regarding its reproduction. Its resemblance to worms probably protects the Eurasian Worm Snake from persecution by humans, since it is seldom identified as a snake. The Eurasian Worm Snake inhabits southern Europe, Turkey and parts of the Middle East.

In Palestine – Common, in most Mediterranean and semi-arid ("semi-desert") habitats.