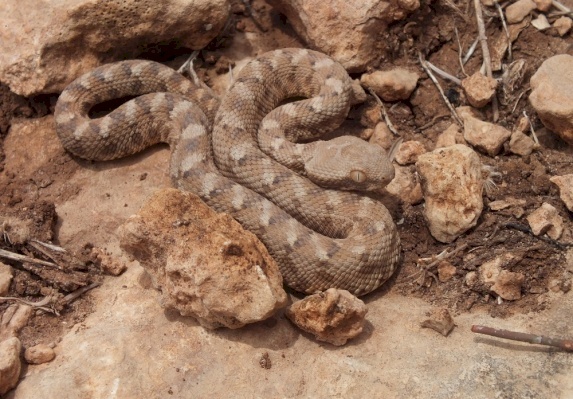 The Saw-scaled Viper belongs to the Viperidae family in the Ophidia (snakes) sub-order of the order Squamata (scaled reptiles). It is one of several venomous snake species present in Palestine, reaching a maximum total length (body + tail) of 80 cm. The Saw-scaled Viper is well camouflaged, to match the background of its natural surroundings. There is great variation in the coloration and the markings on its body, and differences between populations living in different habitats are often seen. Its name is derived from the fact that its flank is covered by scales with a serrated keel in the middle of each, resembling “saw teeth”, and these scales produce a loud sound when the snake rubs the coils of its body together. This is considered a warning sound towards threats – of predators, or animals that may inadvertently step on the camouflaged snake. They are active usually at night (nocturnal), but during autumn and spring they may be active during the day on occasion. The diet of the Saw-scaled Viper consists of small vertebrates; namely, lizards, rodents, and in a large part, passerine birds. They have been documented waiting in ambush near desert springs, striking unsuspecting birds that arrive to drink water. It is oviparous (the young hatch from eggs), hatchlings usually appear during late summer and early autumn. The hatchlings are venomous and potentially dangerous to humans from the moment of hatching. Despite its potential danger to humans, the Saw-scaled Viper is mostly beneficial to man, by devouring various pests especially rodents (mice, rats, etc.). The Saw-scaled Viper inhabits the Middle East and most of the Arabian Peninsula.

In Palestine – Common in the semi-arid and arid habitats.