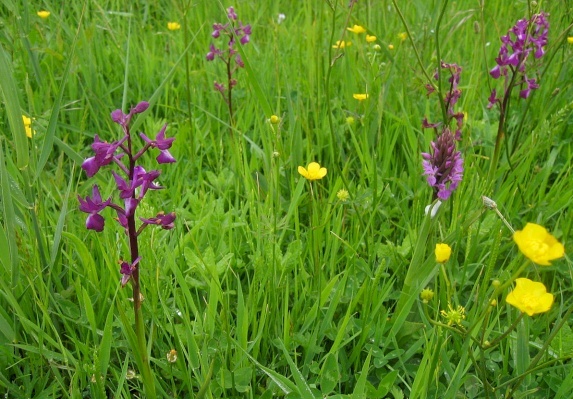 A rare member of the Orchidaceae family that is found in alluvial areas and riverbanks and marshlands it is a tuberose geophyte. In the fall a rosette of leaves sprout followed comparatively late, when the leaves are drying up, by a single flowering stem. It grows to a height from 50-80 cm and the stem turns from green to a purple color as it rises near the inflorescence, a cluster of 25-50 flowers. The flower is characteristic of this family: The deep purple flower has a white spot in the center. The flower is constructed of an outer whorl of 3 sepals similar in color to the inner whorl of three petals. The inner middle petal forms an exceptionally long and narrow purple "lip" (7-9 cm) in order to attract insects. The nectar produced in the up-tilted spur distinguishes it from other orchids in the area.

In the center is a single column composed of the male stamens united with the female style. The pollen is aggregated in a body called a pollinium and transferred as such. The ovary is composed of three carpels forming three ridges on the outside of the seed pod. The ovules are arranged along these ridges inside the ovary.

A fungus is necessary for the germination of the seeds and is apparently necessary for nutrient absorption in other stages of growth as well.

Following the fruit set, a tuber develops which enables the plant to survive the summer.

Flowering period: February-April. Pollination is known to be carried out by the bee, Eucera.

Ecology: It grows in areas characteristic of Mediteranean-Irano-turanic.

Distribution in Palestine:  A rare flower found in the Judean Mountains.