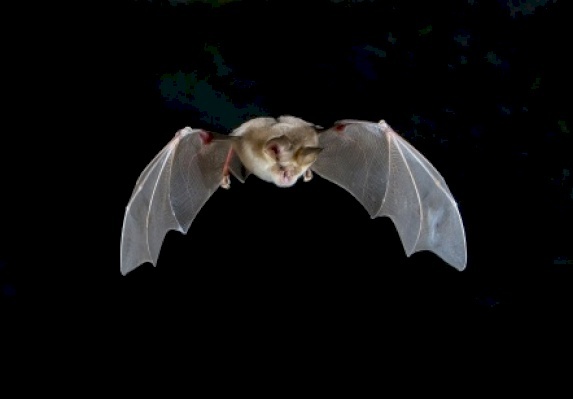 Description – Mehely’s Horseshoe Bat is a medium-sized insect-eating bat. They have a light brown back, with a whitish underside. The wings are a light grey with white veins. Its outer ears are small and wide, but do not have a tragus. Their wings are medium length. The upper skin bulge on its nose is pointed and when looking at it in front it looks like Isosceles triangle.

Distribution in the country and worldwide – They tend to be limited to the countries surrounding the Mediterranean Sea end even then have scattered distributions. While uncommon, they can be found in Palestine, and some records have been found as far East as Afghanistan.

Habitat – This species of bat can be found in brushy and wooded areas near water. During summer and winter, they commonly roost in caves rather than other structures such as buildings. Unlike some species of bats, they are not migratory.

Behavior – Another nocturnal species of bat, the Mehely’s Horseshoe Bat leave their caves at dusk and return at dawn. They navigate and hunt insects, primarily moths, using echolocation, but unlike the Grey Long-eared Bat, they tend to hunt from a perch. They also hibernate in large colonies during the winter.

Breeding/mating (season, how and where) – Mehely’s Horseshoe Bats nest in colonies, but there is little information as to whether there are separate colonies for males and females.  Mating selection is effectively a lek, with males calling at different pitches and females choosing which male they will mate with. Each female tends to birth two pups in early summer.

Threats and hazards – Mehely’s Horseshoe Bats are at risk from many of the same factors as the Grey Long-eared Bat such as habitat loss and fragmentation and insecticides. Unfortunately, this is not a well-studied species and there are likely other major causes for decline.

Cool facts – Like the Grey Long-eared Bat, Mehely’s Horseshoe Bat also uses echolocation to hunt prey. However, like other members of the genus Rhinolophus  the sound is emitted from their nose rather than their mouth. They have frequency-based mating selection .