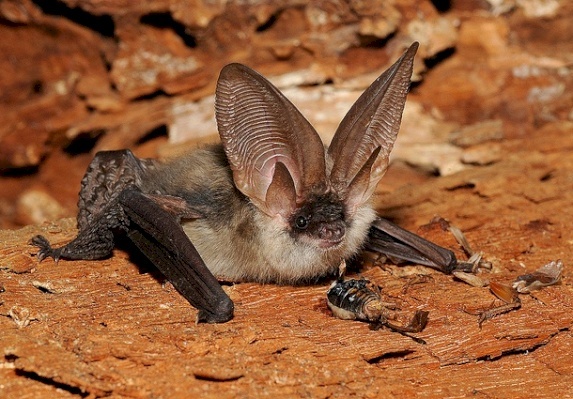 Description – It is a small, brown insect-eating bat with a paler belly. The eyes are large, the nose and upper lip are greyish-black, and the ears and wing membranes are blackish. The outer ears are approximately twice as long as the head. While resting, the outer ears are folded under the wings, and only the long tragus is prominent above the head. The wings are short and rounded. They have a very light and flappy flight style, rarely reaching higher than 10 m. In flight, it is very difficult to differentiate them from other small insect-eating bats.

Distribution in the country and worldwide – They are most commonly found in Western Europe, North Africa and Asia. In Asia, they are mainly located from Turkey and Palestine in the west to China in the east). It is the only species of long eared bats which are living in Palestine.

Habitat – They are typically found at low elevations (below 400 m) such as agricultural areas and valleys. Their summer roosts are typically in artificial structures, but tend to hibernate in natural locations such as crevices, deep holes in the ground and caves.

Behavior – Grey Long-eared Bats roost in caves and ruins. They eat flying insects and store fat during the autumn for their winter hibernation (between September and April). While hibernating, they lose about a third of their autumn body weight.

Breeding/mating (season, how and where) – Grey Long-eared Bats live in two separate colonies, one for males and one for females. The mating occurs in the male colony. Summer maternity roosts are small, usually containing 10-30 females, and a single pup is produced in mid-to-late June. In Europe, the gestation period lasts 56-100 days. Mating occurs in autumn, and the young are birthed sometime in April to May. At three weeks old, the pups are left alone and they reach sexual maturity around 1.5 years old. The oldest known was 14.5 years, though males average five years and females nine.

Threats and hazards – They are at risk from many of the same hazards as most species of bats such as long, cold winters, habitat fragmentation and loss and insecticides.

Cool facts – Also similar to other species of bats, they navigate by echolocation. They can use the returning sound wave to detect prey size, speed and direction. Most sounds emitted are higher than humans can hear.