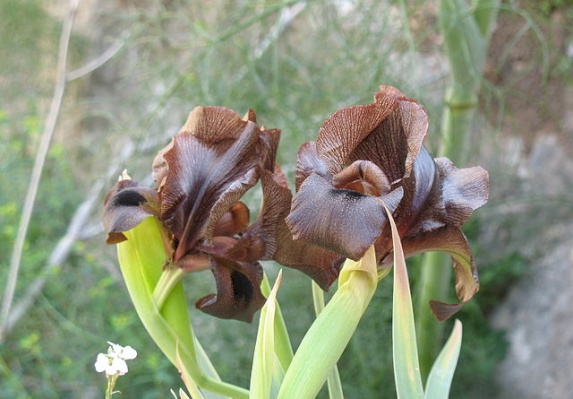 This perennial geophyte of the Iridaceae family sprouts from a rhizome and is endemic to Palestine. It multiplies vegetatively from the rhizome, forming large clumps of plants identical genetically. It grows to a height of 40 cm. with wide, straight, entire leaves, which will curve in some locations. Its flower is a uniformly dark brown-bordeaux color, however there are differences in shades between individual plants as well as instances of albinism at various levels, which can result in a completely yellow flower. All plant organs are multiples of three in number.

The flower has a unique structure characteristic of this family. One leaf encompasses the bud which blossoms into a flower radially divided into three sections, 120 degrees from each other. Each section has an inner and outer petal, one pistil and one stamen. The outer petal is horizontal whereas the inner petal is vertical, and in some species it can be especially colorful in order to draw attention. The three stamens and three pistils lead to an inferior ovary (below the flower) with 3 chambers holding 60 ovules. The pistil is wide, flat and colored like a petal. It is held parallel to the outer petal forming a "pollination tunnel" with the stamen and stigma inside.

Flowering time: It flowers in March and April. Insects are required for pollination and self-pollination is avoided by the earlier maturation of the stamen as compared to the pistil of the same flower.

The spindle-shaped seed capsule is divided into three sections lengthwise, within which lie a hard seed connected to a fat body. The seeds are dispersed as they are collected by ants which eat the fat body.

Ecology: It grows in limited, less hospitable surroundings such as scrublands, semi-desert and desert habitats, where it is rare.

Distribution in Palestine: It is found on the slopes of the mountains on both sides of the Jordan River valley as well as Jerusalem wilderness and Negev deserts.