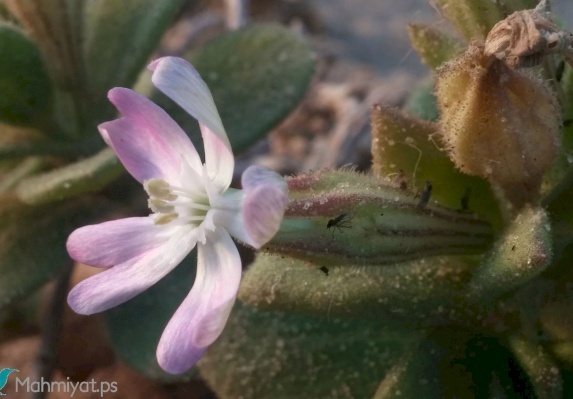 The Succulent Campion belongs to the Caryophyllaceae family in the Caryophyllales order. The name comes from the meaning of succulent which means soft or juicy. This plant is fleshy perennial with chamaephyte life form, it has woody stock and numerous ascending stems, clothed throughout with a dense mass of sticky granular soft hairs and often coated with sand grains . On the top of the stems appear large, solitary or paired white scented flowers. It reaches height up to 25 cm. leaves are ovate or lanceolate, usually opposite ,two leaves per node with alternate pairs are at the right angle to each other, leaf type is entire and leaf margin is soft and stipule is absent. Flowers are yellowish or tinged pink, petal-limb divided at the tip in two parts by a median cleft. Flowers are usually hermaphrodite where they have both male and female reproductive organs. The moths are the likely pollinator and the flowering period from March until July. Fruits are a capsule, splitting open to release the seeds, with teeth equaling the styles in number or twice as many more, the fruits can be also small dry single seeded fruit. It has homogeneous seeds-fruits.

Ecology: The habitat of this plant is maritime sand, Mediterranean strand vegetation , and soils and sands along the sea shore .It is glycophyte in terms of salt resistance and it is leaf succulent plant and the spinescence is absent. It is mostly natural, also synanthropic and follow the Mediterranean chorotype.

Distributions in Palestine: Mediterranean coast and grows in sea sands along the Gaza sea shore .

Conservation statues: Rare according to the IUCN list 1997. Now threatened by increasing tourism activities on the near sea shore regions and due to the human activities, sand depletion, and the plantations of other trees near the sea to replace the native ones.