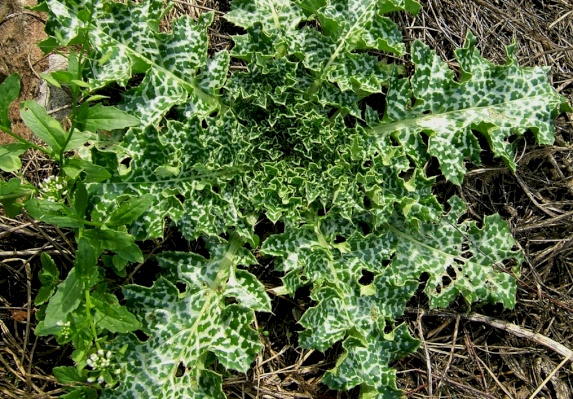 An annual "thorn" that can grow to a height of 1-2 meters, this member of the Asteraceae (Compositae) family is very common in Mediterranean, as well as the Irano-Turano and Irano-sibiri habitats. The large lobed leaves have dentate and spiny edges. They are "splotched" and veined with white in areas that lack chlorophyll or have air pockets .They form a rosette at the base and are alternate and in decreasing size as they sprout along the stem. Each stem rises from a rosette of leaves and at its tip is a single large flower head, 3 cm in diameter, with either red-purple (common) or white hermaphroditic connate florets. The accompanying bracts have simple thorns.

Flowering period: It flowers from March to May. Pollination is generally by bees and the flat seeds are black with whorls of rough white bristles. .

Ecology: It is found in nitrogen rich soils, especially in disturbed areas such as roadsides and empty lots. The thorn'e "immunity" from grazing make the Milk thistle a good breeding habitat for the Common Whitethroat (Sylvia communis) and the Rufous Bush Robin (Cercotrichas Galactotes). These birds nest between the thorns as early as March to May, to avoid the risk of fires that catch the thorn quite easily when the thorn is dry.

Common and medicinal uses: Young stems and flowers are used to improve digestion and remedy liver, gall bladder and intestinal problems. A drink produced from all flower parts is a known treatment for high blood pressure, kidney stones, and constipation. Young stems may also be eaten.

Distribution in Palestine: It is found almost in all parts of Palestine, especially in disturbed and over grazed sites in Mediterranean habitats. Can be found also in desert habitats near water or irrigated fields.