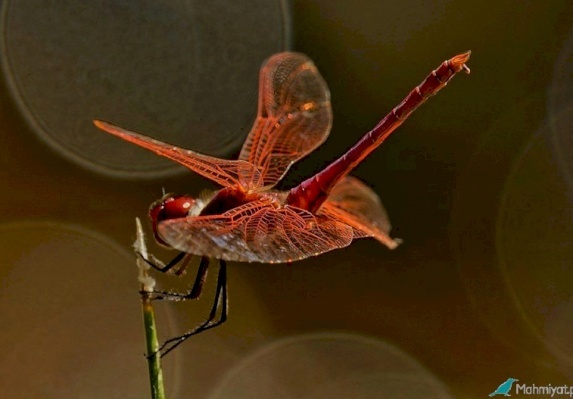 This is a species of dragonfly (order Odonata) widespread and common in Africa, western Asia and southern Europe, being native in most countries of these continents, including in Palestine and wider area. Its English name is red-veined dropwing, because of the intense red and purple body colouration of males.

Relatively small-sized dragonfly, the male´s head, vertex and eyes are deep red and the thorax varies from red to deep purple, with black stripes. The slender abdomen is bright red, whereas the labium is deep yellow with a dark brown stripe in the centre. The wings have also bright red veins and orange makings at their bases. These markings are similar for females, but the abdomen and face are yellow to yellowish brown.

Trithemis arteriosa is a generalist regarding to habitats and often a dominant species in perennial water with sparse vegetation. It can be found close or on the surface of a wide variety of water habitats, such slow-flowing rivers, streams, ponds, intermittent rivers, freshwater lakes, freshwater marshes, irrigation channels and ditches. In these habitats T. arteriosa can find food resources, such small insects and also use it as mating site.

The red-veined dropwing, as a desert-inhabiting species dependent on perennial waters, is able to establish viable populations with high genetic diversities. Thus, this gene variation is due to their dispersal abilities, which is highly important, since populations are always at risk of a local or total drought of water resources. Trithemis arteriosa is abundant, hence, not threatened. However, water pollution may cause decline in local populations. 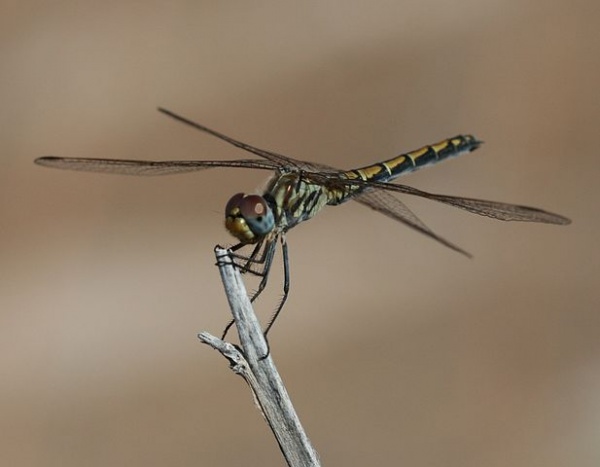