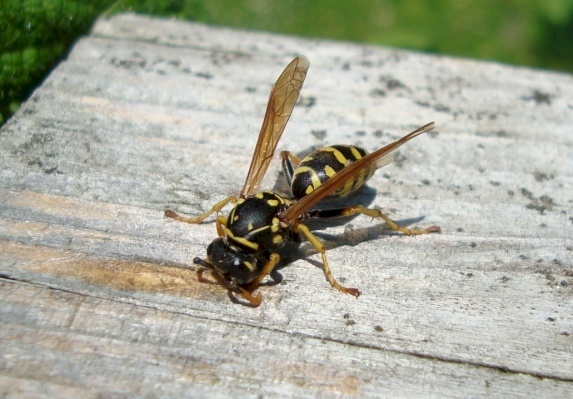 This is one of the most common and well-studied social wasp species. They are often mistaken with yellow jacket wasps, but can be distinguished from these by their very thin waist and legs that hang down as Polistes dominula flies. They are native from southern Europe, North Africa, western Asia and the Middle East, being very abundant in the Mediterranean region. This species has been introduced to Australia, North and South America and to South Africa.

The body of P. dominula is black and yellow coloured, with wing lengths of males ranging from 9.5 to 13 mm, while those of females range from 8.5 to 12 mm. There is, however, little variation among individuals. Female has black mandible and a large black central spot on the clypeus. Male has more yellow colour on the face and on the ventral surface of the mesopleuron. Male abdominal spots represent dominance: the smaller, elliptically shaped are the spots, the best reflect a dominant male that is preferred by females and wins competitions with other males. In contrast, males with larger, irregularly shaped abdominal spots are generally subordinate and less successful for mating. One more particularity of these wasps is the cuticular hydrocarbons present on the surface of their bodies that play a role on the recognition among individuals and nest mates.

Polistes dominula lives in terrestrial, shady habitats, mostly in temperate forests, grasslands and also in gardens and other green spots in urbanized areas. This wasp species is very generalist, feeding on several families of insects. Hence, man-made structures can provide good opportunities of shady habitats and food resources. In addition, P. dominula is not in danger of extinction, due to their exceptional survival features, such as high ability to face predator attacks; productive colony cycle and short development time, as well as good adaptation to new habitats.

As a social insect, P. dominula lives in colonies. Typically, Polistes wasps collect fibers from dead wood and plant stems that, mixed with saliva, they use for the construction of water-resistant nests made of grey or brown papery material. A colony is founded by a single or a small group of females that have just emerged from hibernation during the winter. The founding queens spend around one month for constructing and provisioning the nest in spring. The queens start laying eggs from March to beginning of April and the first offspring will become workers and work on the developing colony. Even when there is more than one foundress present, the one who lays more eggs will be the dominant female. Males are produced later, and when they start to hatch, a few daughters mate and leave their nest, overwinter in another cavity, to found their own nest after winter. This is the colony dispersion and it happens in late summer. The non-reproductive males and non-reproductive females do not survive the winter because of their shorter lifespan of around 11 months.