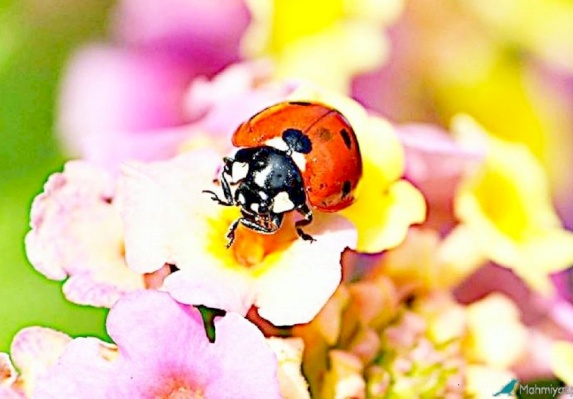 Coccinella spp. (Beetle - Ladybirds). This genus of beetles from the family Coccinellidae (order Coleoptera) encompasses several species of small beetles, all mostly known as ladybirds or lady beetles. Coccinellids are found worldwide, with over 6000 species described. The elytra of most species of Coccinella are of a red or orange colour, with black spots or bands. Ladybirds are common and widely distributed in Palaearctic region with some species occurring in Nearctic region. The most common species of this genus is Coccinella septempunctata, which has seven black spots on its red elytra, therefore its name that in Latin means septem=seven and punctus=spots. Coccinella septempunctata is native to Europe, Asia and North Africa.

The body of an adult C. septempunctata is between 7.6–10.0 mm long, but during its development, it goes through egg, larva and pupa stages, till developing to adult. In general, each female ladybird can lay over 1000 eggs. The eggs are elongate, laid on plants and take in average four days to hatch, although increasing environmental temperature reduces the development time of the egg stage. After hatching, larvae remain on the eggs for a couple of hours, feeding on the eggs shells and on infertile eggs. Further, larvae drink body fluids from aphids, now their main food source also in adult stage. After the larvae stage, comes the pupal stage, which lasts around eight days, varying a little due to climate temperature. The typical colouration of ladybirds develops over time and the red colour of the background deepens over the next weeks and months. Although some adults vary considerably in colour pattern, C. septempunctata show little variation. However, seldom the number of spots may vary from 0 to 9. Their life spam is around three months. Ladybirds live in several habitats, from semi-natural forests to managed agricultural areas and urban and suburban regions, including home gardens, parks and green areas. The main preys of ladybirds are aphids. Thereby, some species, such C. septempunctata are even used as biological control agents against aphid plagues on plantations.

One further curious aspect of ladybirds is that their colour patters with intense red and black spots make them unappealing and sort of scary to predators. In addition, they can spread a fluid from glands in their legs, which causes a spoiled taste. Besides that, when threatened, ladybirds can also pretend dead, to repel the predator. Furthermore, the value of C. septempunctata as a pollinator of the endemic and endangered plant Disanthus cercidifolius in China, and in mango plant has also been documented.