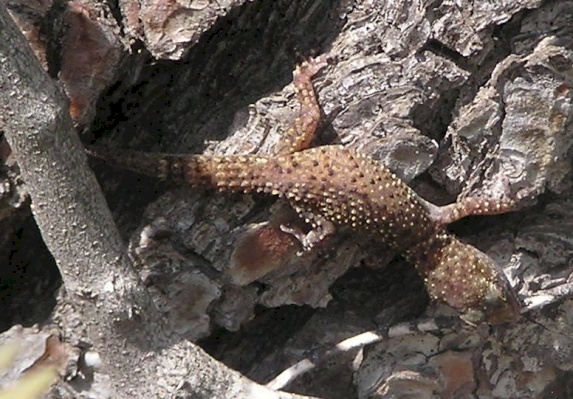 The Mediterranean house gecko belongs to the Gekkonidae family in the Squamata order (suborder Sauria). The most common gecko in Palestine. The adults’ length is up to 12 cm (body + tail). This is a nocturnal gecko. Its back is covered with irregular spots and lumpy scales.  The body color varies from pink to brown, depending on the environment. The tail is covered with light and dark rings and is detachable. The finger tips are equipped with suction cups and each ends with a claw. The suction cups enables them to climb on smooth and steep surfaces. The skin is almost transparent and its internal organs can be observed. There are several cycles of mating during spring and summer. In each cycle the female lays 2 eggs that hatch 2 months later. While pregnant, the eggs can be seen through the female’s skin. It mostly feeds on arthropods such as moth and even mosquitos. Therefore, humans consider them as useful.
The Mediterranean house gecko lives usually in groups which are hierarchical. It communicates through vocals which can be heard at a distance, especially during the mating season. It inhibits parts of Africa, the Middle East, parts of Eastern and Southern Europe. Recently introduce into USA and Central America.

In Palestine: it is common in Mediterranean and semi-arid habitats, including residential areas.