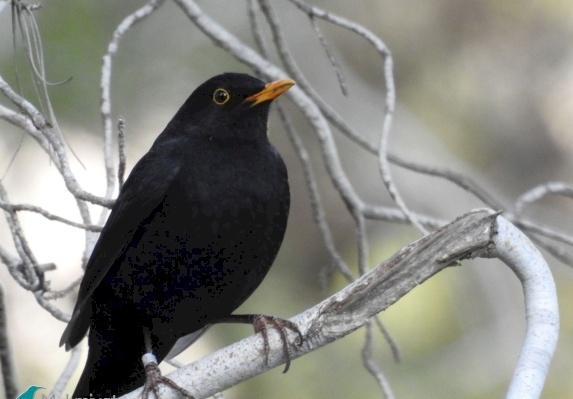 The Blackbird is in the Turdidae family in the Passerine order. It is 23.5-29 cm in size and 67-97 grams in weight. It is one of the most common thrushes in Palestine. Its beautiful song is very familiar and usually it’s the first bird song heard in the morning, even before dawn. The male sticks out in its jet black color and its yellow beak and eye ring, while the female is reddish-brown with dull stripes on its throat and chest. The Blackbird is similar to the very rare Ring Ouzel but lacking the white crescent on the chest. It may also look similar to the Blue Rock-thrush in plumage but differs in structure and behavior. The Blackbird is solid in structure with rather long legs comparing to other songbirds and it often uses them for scraping and foraging for food in the ground. The tail is long and round and usually the blackbird holds it upwards while calling. The Blackbird lives in forests, groves, parks and gardens and spends most of its time deep inside the thick vegetation. It is usually running or hopping on the ground foraging for food in the damp soil under the fallen leaves. It pecks and searches among the leaves and sometimes scrapes them with its legs. Once in a while the Blackbird stops the foraging, sticks out its tail and tilts its head, probably to listen to movement sounds of the worms and insects that it's looking for. The Blackbird diet also consist of fruits and berries. The Blackbird has a great variety of calls, and its song is slow and pleasant and can resemble the melody of a flute, some may even say it's a bit melancholic. It's usually composed from several short segments that are repeating every several seconds. On the other hand its alarm call is a very high-pitched and noisy "sriiii" or "tsiii". The Blackbird usually flies low to a short distance in a fast and straight forward flight. Usually the Blackbird will call during flight a series of noisy and excited "chuck-chuck-chuck" calls that intensifies while the Blackbird is getting further away. The Blackbird has several subspecies, the main ones are: T. m. syriacus that breeds in southern Turkey, Iraq, Iran, Lebanon and northern Egypt. It is a common resident in Palestine. T.m. aterrimus that breeds in northern Turkey and Iran, the Caucasus, the Balkan and Ukraine. It is wintering and passing through Palestine in small numbers. T. m. merula that breeds mostly in Europe.

Status in Palestine – common in woodland and Mediterranean habitats and gardens all year round. Rare in the eastern slopes in vegetated areas.The Blackbird is threatened by Illegal hunting in Europe and also in Palestine.