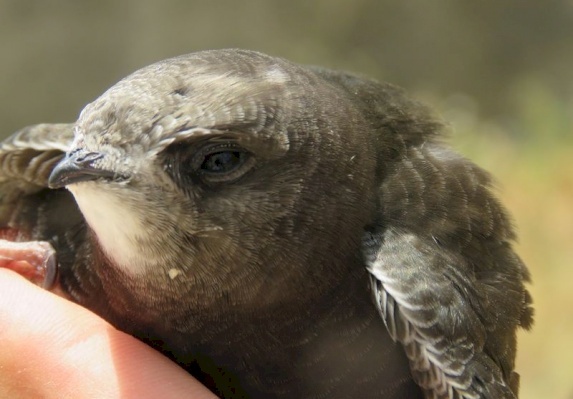 The Common Swift belongs to the Apodidae family in the Apodiformes order. It is 17-18.5 cm in size and 27-47 grams in weight with a wingspan of 40-44 cm. The common swift is a medium sized swift, larger than the little swift, smaller than the Alpine swift and larger with longer wings than the barn swallow. The common swift is a graceful, slender bird with sickle shaped, long and pointed wings and a forked tail. On the background of the sky, the swift usually appears black, but in proper light the white throat is evident as well as the dark contour feathers in the under wing and the lighter flight feathers. The common swift is similar to the pallid swift but darker, with a smaller white spot on the throat, and narrower wings and head. Like most of the swifts, the common swift spends most of its time in midair. It often reaches the heights of one kilometer and more where it feeds on flying insects.  No other bird spends as much time in the air as the Swift. The swift can hunt, drink, play, groom their feathers, mate and sleep while in the air. They "land" for nesting only, and never on the ground, latching on the vertical surfaces with their tiny legs. If a swift finds itself on the ground it is doomed to some unfortunate incident, as it is incapable of taking off again due to the ratio between its long wings and tiny legs. In the evening hours the swifts form loud "gangs" that fly about for their enjoyment, gathering and separating in turn. Later on in the breeding season, large flocks will form and call one another to rise to greater heights to sleep. While sleeping the swift conserves energy by "closing down" half of its brain, a state called unihemispheric slow-wave sleep. At low temperatures it conserves energy by lowering the metabolism to a minimum rate, a state called torpor. Compared to birds of its size, the swift has a long life, and is known to live for up to 21 years. The swift is monogamous and the couple returns to the same nest every year. The common swift is very vocal with a variety of shrieks, high whistles, or" Srrrir" and "shreee" of varying lengths. The sound of the calls of crowded flocks flying low above the urban rooftops is especially impressive. The common swift nests in cities, small settlements and sometimes in cliffs. The nest is made in cavities in walls, shutter boxes, etc. The nest entrance has to be built so that the swift can "fall" three meters in the air to gain velocity as it doesn't use its legs to take off into the air. The common swift breeds in most of Europe, central Asia, east to China and Mongolia. The world population is decreasing because of the scarcity in prey and potential nesting sites (Birdlife International, 2012). In Europe, the use of insecticides has reduced the supply of prey and changes in construction techniques decrease the possible nesting sites. (De Hoyo et al., 1999)

Migratory Behaviour: In Palestine it’s very common during passage and breeding seasons, it is Summer visitor and nests in cities.