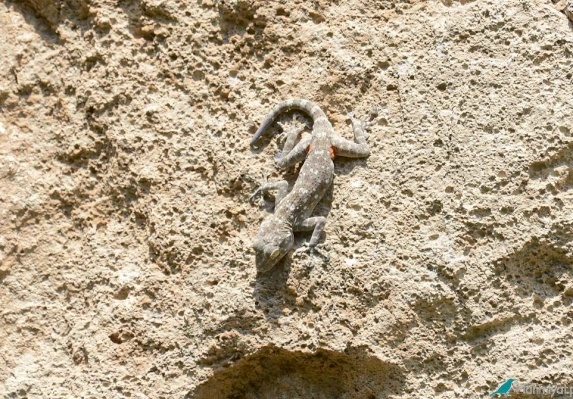 The Sinai Fan-fingered Gecko belongs to the Phyllodactylidae family in the Sauria (lizards) sub-order of the order Squamata (scaled reptiles). It is the largest of the five representatives of geckos present in Palestine, reaching a maximum total length (body + tail) of 17 cm. The Sinai Fan-fingered Gecko is well camouflaged, to match the background of its natural surroundings. There is great variation in the coloration and the markings on its body, and differences between populations living in different habitats are often seen. It is named after the fan-shaped protrusions at the tips of its fingers, these "fans" enable it to climb almost any surface with amazing grace and agility. The diet of the Sinai Fan-fingered Gecko consists of invertebrates, mainly insects; and occasionally, scorpions and small lizards including other geckos. They are often observed waiting in ambush near artificial lighting, for example lamps on building walls, hunting the insects that are drawn to these lights. It is oviparous (the young hatch from eggs), hatchlings usually appear during late summer and early autumn. Each female deposits just two eggs in each clutch, but if conditions are good and food is abundant a single female may lay two clutches, or perhaps even three, per breeding season. The eggs are laid in rock crevices or under rocks. Females sometimes deposit eggs in "communal" nesting sites, where dozens (or hundreds) of old and new eggshells may be seen. The Sinai Fan-fingered Gecko is very beneficial to man, as it devours huge amounts of pest insects (moths, mosquitoes, flies etc.), and many folk tales exist with regards to these geckos bringing either good or bad fortune to human dwellings. The Sinai Fan-fingered Gecko inhabits parts of the Middle East.