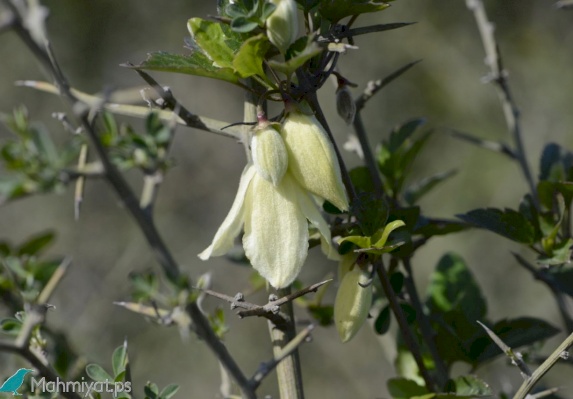 Clematis cirrhosa The genus Clematis belongs to the family Ranunculaceae and comprises around 400 climbing, woody, vines/lianas species, which are very popular as garden plants. Some species are herbaceous and some as shrubby. The cool temperate species are deciduous, but many of the warmer climate species are evergreen. Clematis species are mainly found throughout the temperate regions of the Northern Hemisphere, seldom in the tropics. They are mostly of Chinese and Japanese origin. However, Clematis cirrhosa is distributed in Northern Africa (Algeria, Libya, Marroco, Tunisia); in Western Asia (Palestine and wider area, Lebanon, Syria and Turkey) and in south Europe (Cyprus, Greece, France, Italy, Portugal and Spain). This species is a climbing plant, whose English common name is evergreen clematis, fern-leaved clematis or evergreen traveller's joy. Evergreen clematis grows in habitats like the Mediterranean woodlands, shrublands and montane vegetation. Evergreen clematis has prostrate, climbing, tendrils and branched stems, which adapted to climb up to four meters on walls or other supporting structures. The leaves are lance shaped, simple, opposite, with entire, dentate or serrate margins. The leaflets and leafstalks curl and twist around supporting structures to anchor the plant as it climbs. The four petals (fused on their base) flowers are white/cream coloured and the flowering period is from November to February, sometimes to March. The fruits are dry, indehiscent and contain one plumose seed only. In addition, C. cirrhosa is a perennial plant with a very sweet and delicate fragrance. Therefore, big bees such bumblebees are also foraging on this plant. Interestingly, C. cirrhosa is mild to moderate poisonous, causing burning sensation in the mouth and intoxication. Despite that, it seems to be used as ointments on the treatment of pain, but no further studies have already explored this potential.