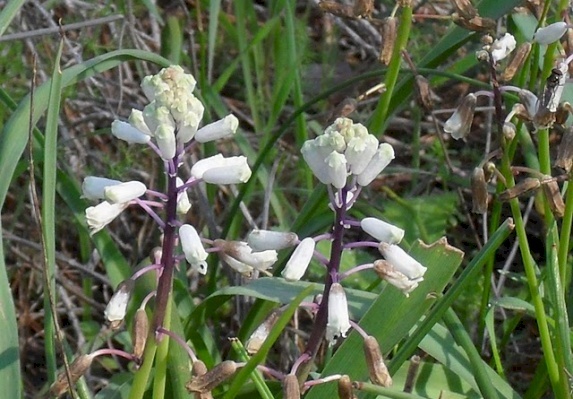 . It is distributed and native in Mediterranean area, more specifically in Egypt, Lebanon, Syria and Palestine wider area.

Bellevalia flexuosa is found in habitats such rocky places, sandy soils, desserts, extreme deserts, alpine regions and at the edges of cultivated fields.

The different types of habitat that it may occur promote a high genetic variation to this species. The Common roman squill is 12-23 cm high. The stems and pedicels can have a violet or pink colour. The leaves are long, forming a rosette, usually wavy with short ciliate and rough margins. The inflorescence is a raceme, with nearly tubular flowers that are white/greenish coloured. The flower period is short, ranging from February to March and the flowers are pollinated by bees.

Orchis israelitica, which evolved striking similarity in appearance with the lily, blooms at the same time as B. flexuosa, so that bees can also visit the orchid by mistake. These short visits seem to be sufficient for the pollen transportation of the specialized system of the orchid, which is in large packages called pollinia. In rare orchids like O. israelitica, even few visits may determine reproductive success during one ﬂowering period. Furthermore, B. flexuosa has a storage organ, which is a modified part of the plant for saving energy or water and it is located under the soil, where it is better protected against herbivorous. Plants with this storage organ are called geophyte.