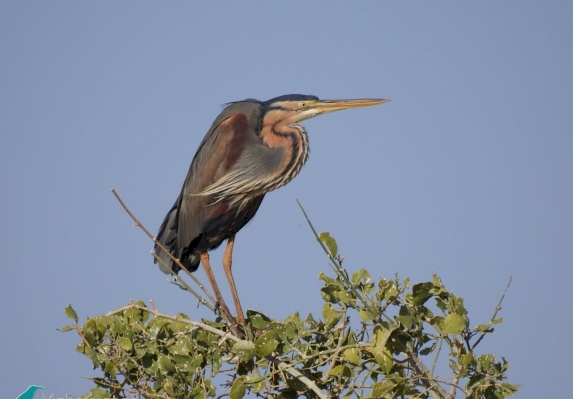 A visitor in Spring, Automn and Winter. Found in Aquatic areas and agriculture ponds .

The purple heron is a widespread species of wading bird, recognizable by its dark reddish-brown plumage. For adults the forehead and crown of the head are black. It is predominantly distributed in the Arctic and breeds in Europe, Asia, and Africa. The range of the western race extends from Portugal eastward through much of central and southern Europe and parts of North Africa to Lake Balkhash in Kazakhstan.

The purple heron often exceeds its natural range upon return, is a vagrant to northern Europe including Britain, breeds in Africa, central and southern Europe, and southern and eastern Asia, and migrates in groups in winter. It prefers densely cultivated habitats near water and a swampy environment, especially around reed plants.

It feeds on a range of prey including fish, rodents, frogs, and insects. The International Union for Conservation of Nature records that the bird's population is declining, largely due to diminishing wetlands that are its habitat, but the bird is still common.

Purple herons usually breed in colonies but sometimes nests are solitary. It is sometimes associated with other species such as the gray heron in multispecies nesting colonies. The site chosen is generally in reed beds or low bushes near large lakes or other extended wetlands. They build a huge nest out of dead reeds, sticks, or whatever is available. About five bluish-green eggs are laid and both birds incubate them. The young hatch after about four weeks and grow after six weeks.

Habitat: The purple heron lives at altitudes from sea level and 1800 meters. They spend their winters and breeding seasons in shallow freshwater wetlands, as well as some edges of rivers, ponds, and swamps. All habitats have large reed beds.