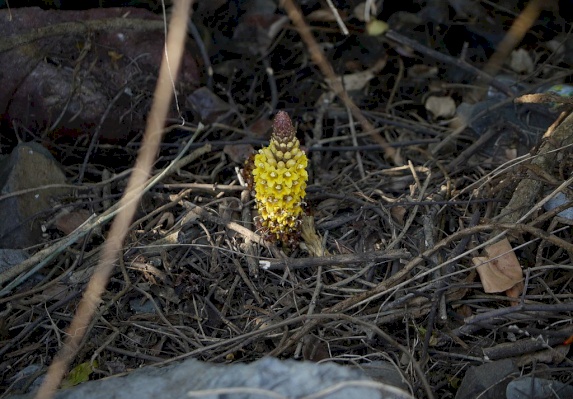 A perennial subterranean plant of the Orabanchaceae family, parasitic on roots of other plants, usually of the Cenopopdiaceae or Zygophyllaceae families. Only its inflorescence, a pyramid spike, grows above ground from a tuber. Its thick stem grows to a height of 40-80 cm with each flower nestled between bracts. Each calyx has most of its organs in multiples of five with a bright yellow funnel-shaped corolla formed of 5 petals united. The 4 cm long funnel terminates with the margins of the five petals forming two "lips", the upper one formed from 2 petals, ends with two lobes. The rest of the petals form the lower "lip". Sometimes the lobes are rolled out and acquire an orange or purplish color. The nectary rings the ovary at its base, inviting to insects with a long proboscis only. The four anthers are arranged in pairs.

The scale-like leaves are long, overlapping and pointing upwards. They are brown or of a paler color.

Flowering period: The flowering period is from February to April, after recent rains. The fruits are black pea-like capsules containing large amounts of dust-fine seeds.

Ecology: It grows in clusters in hot deserts, in wadis and saltpans. When flowering, the flowers produce a big quantity of nectar that attracts insects that have a long proboscis and can reach the nectar, hidden deep inside the flower.

Common and medicinal uses: The stem is boiled as a remedy for diarrhea

Distribution in Palestine: Common after rain, Found in the eastern slopes Deserts as well as the Dead Sea valley.