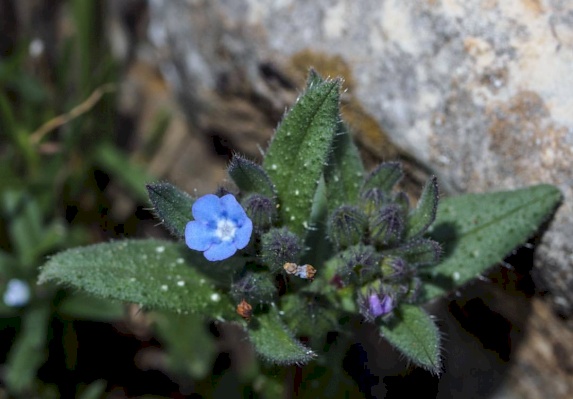 This annual plant from the botanical family Boraginaceae is known by its English common name Blunt nonea. Blunt nonea is distributed in Greece, Bulgaria, Turkey, Lebanon, Palestine and wider area, Jordanian and Syria, in habitats, such the Mediterranean woodlands and shrub lands, steppe, deserts and extreme deserts, also common in dry grasslands. Nonea obtusifolia is rare in most parts of Palestine and wider area, but common in some localities. Its conservation status is endangered, due mainly to the small populations with restricted distribution, to changes of the vegetation cover and to urbanization.
Nonea obtusifolia has ascending, hairy stems measuring 5-15 cm long. Its leaves are also hairy, 3 to 5 cm long, elliptical to elliptical-ovate, have entire margins and are alternate, with prickly bristles on the edges, often with white bumps. The flowers are 8 mm long, 3-6 mm diameter, are hermaphrodite, light to dark blue coloured and form inflorescences with a terminal flower. The flowering period is from January to April and the fruits are black shiny and oblong. The flowers are pollinated by insects.
There are about 35 plant species belonging to the Genus Nonea worldwide, distributed  from  central western  Asia  to  the  Atlantic  area  of  southern Europe  and  northern  Africa.  However, there are fewer species that occur in Europe and around the Mediterranean. Furthermore, Nonea genus is problematic especially due to difficulty in observation and identification of morphological characters. Thus, some recent studies with pollen morphology have altered the taxonomy of Nonea.