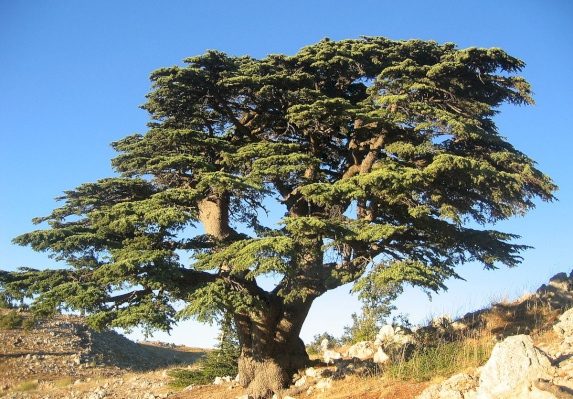 This plant species is an evergreen coniferous tree from the family Pinaceae, whose common name is Lebanon cedar. Cedrus libani is native to a limited area in the Mediterranean elevated mountains of Lebanon, Syria and Turkey, growing in forest habitats, in calcareous and rocky well drained soils at heights of around 1000 m. In a region of Lebanon, standing on slopes of 2000 m high, there are around 400 trees which are 1200 to 2000 years old. Wild Cedrus libani is not commonly found anymore, hence its conservation status as vulnerable, with decreasing in population. However, this plant is worldwide planted in parks slopes and roadsides, due to its beauty.
Cedrus libani grows up to 30 m high at a slow rate and has massive trunk with more horizontal branches. The first branches are ascending and grow to a massive size, spreading then later to a horizontal position. However, the second branches grow since the beginning in a horizontal position. Its dark green leaves are like needles, arranged in spirals. The flowers are not showy, but with brown to purple colours. The Lebanon cedar blooms when it is around 25-30 years old. Its flowers (catkins) are wind pollinated, unisexual, with both male and female flowers on the same tree. The catkins form male and female cones of 10 to 12 cm long. The cones are formed at the end of the short buds and take up to one and half years after pollination to mature. Mature cones are ovoid shaped and have grey-brownish colour. Furthermore, these trees grow in full sun and are sensitive to atmospheric pollution, but are highly tolerant to drought.
Lebanon cedar has been used in the traditional medicine as antiseptic and expectorant. Moreover, recent studies with plant stem cell therapy shows anti-aging effects for the skin and brain, anti-inflammatory effect, topical insecticidal, antiparasitic, antibacterial activities and capacity to heal wounds in humans and domestic animals. Additionally, lebanon cedar has always been prized for its fragrance and durability. Historically, the length and quality of the cedar wood was especially desired for building up temples, palaces and boats, by the Assyrians, Babylonians and Persians, for example. The especial and pleasant fragrance of the timber remains for a long time in the wood. In addition, the Egyptians curiously used cedar resin for mummification. The Lebanon cedar is also present in the Mesopotamia history, with the old written “The Epic of Gilgamesh”, dating from 4700 years ago. In this story, Gilgamesh needed cedar timber to finish his city.
Attempts to protect the forests of cedar date back from the Roman Emperor Hadrian (76CE-138CE). However, in the centuries after Hadrian, these trees were extensively extracted for fuel, especially for lime burning kilns. Yet, in the Middle Ages, large amount of forests were cut off by the villagers for farmland, fuel and construction. Furthermore, the British troops during Second World War used the wood to construct railroads.

Other names: Cedar of Lebanon