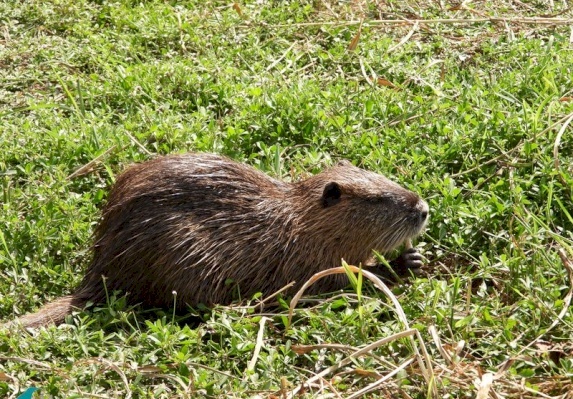 Description – This is a big rodent. The female is smaller than the male and she has six pairs of nipples on both sides of the belly. Their body is covered with long, soft fur which is grayish to yellowish-brown. The tail is long, hairless and covered with scales. The eyes, nostrils, and outer ears are located at the top of the head so they can breathe, see and hear while swimming. Each leg has five fingers with claws, and the hind legs are longer than the front legs. Swimming membranes connect the toes of the hind legs except for the fifth digit. The front legs help them to walk and are used to serve food to the mouth. It has a flat, white nose decorated with a mustache of long sensory hairs. Their orange incisors are long.

Distribution in the country and worldwide – Native to South America but now widespread. Its recorded in Wadi Muqatta’ in Jenin

Behavior – They are communal, living in matriarchal groups. In each group there is a dominant pair, in which the female is the senior. Young females usually remain in the group, while the young males are pushed out. They are predominantly nocturnal, but can also be crepuscular. During the day they are rest in long burrows with an opening about 20 cm in diameter. The burrow is usually dug into the bank of the water reservoirs where they feed on aquatic plants and semiaquatic plants. They will also consume vegetables, snails, and clams.

Breeding/mating (season, how and where) – Usually the dominant female gives birth. The dominant male courts her and mates with her several times. The pregnancy lasts from 128-132 days, and at the end of the pregnancy 4-9 precocial pups are born. The mother breastfeeds them for 7-8 weeks, both on land and while swimming. In Palestine, the females give birth twice a year, once in spring and once in summer. Dominant females tend birth male pups, while low-rated females tend to give birth to mainly female pups.

Threats and hazards – They are hunted because they are harmful to agriculture, for their fur and for their meat.

Cool facts – They are raised in special farms in most of the world because of their high-quality fur. They also tend to escape and establish feral populations.