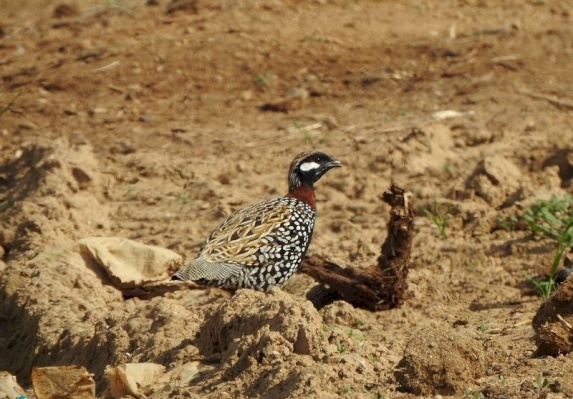 The Black Francolin is an unmistakable dark looking Partridge. The male has a black head and chest with a rufous collar and a conspicuous white cheek. The back and chest are spotted white with "U" shaped markings. The female is dark brown all over with white markings with a brown head and rufous nape.

The Francolins are shy birds that prefer to stay hidden in high grassy vegetation. The best time to watch and hear them is in the breeding season, when the males announce themselves from high rocks or branches with a very unique and beautiful call that is heard over large distances. If in danger, the Francolin will usually run away secretly. Only if danger is close and imminent, they will jump and "shoot" themselves with a fast and straight flight, just above the vegetation line.

The habitats of the Francolins are grass fields with few or no trees, usually with proximity to wetlands and sometimes also in fields with hedges.

The Black francolin is distributed through Europe and Asia but is never a common bird. They are frequently seen in Afghanistan, Pakistan, Nepal, and Caucasus area, Iran, Iraq, Turkey, Syria and Palestine. They were extinct from Lebanon, Saudi Arabia, Italy and Spain. The Francolins are sedentary throughout their distribution range.

In Palestine the Francolin is scarce in Jenin area and rare in the Jordan valley between Ein el-beida and Jericho, where they are often seen in small groups.

The breeding season starts on March and ends in June. The female lays 8 to 12 eggs and incubate them herself for 18-19 days. The incubation begins only when all eggs are laid so they will all hatch together. The young become mobile and can forage from their first day but they stay with their parents along their first winter.