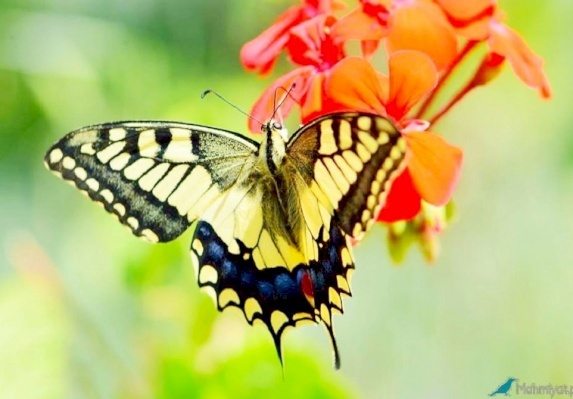 This beautiful Holoarctic butterfly species belonging to the family Papilionidae is also commonly known as the Yellow Swallowtail. It is mostly observed in semi-cultivated habitats in the Mediterranean region. However this species may also be seen in forests, hilltops to mountains and grasslands. The butterfly flies all the year round except in January. This species has two generations in a year, one in early March that continues upto May and another in October.

Larvae feed on plants belonging to the families Apiaceae, Rutaceae and Umbelliferae. Larvae have green bands on their body with black and orange spots. They are considered as a pest that feed on citrus trees and carrots. While the larval stage is the longest in the lifecycle of this butterfly lasting upto 24 weeks, the adult stage is the shortest lasting upto a few weeks only. The adult male butterflies exhibit a very interesting ‘hill-topping’ behaviour for attracting the females for mating.

This beautiful butterfly is not common and its collection by the locals as an ornamental item may affect its population.

Sightings: It occurs in the northern and southern Mediterranean zones while in Palestine, it is found mostly in the southern region.