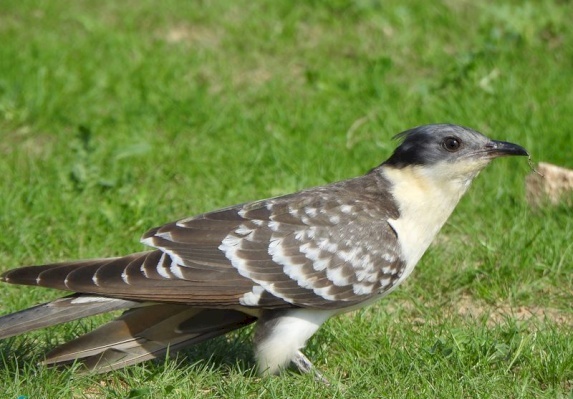 Distribution in the country and worldwide, The cuckoo is common in south west Europe, Middle East, from Asia south to Iraq and Iran. The Palestinian population mostly occurs on migration and breeding seasons but some will stay to over winter each year.

Identification (how does it look like): One of only two species of cuckoo found within Palestine. The great spotted cuckoo is the slightly larger of the two. A very smart bird with its white spotted slate-grey upper parts, white underparts, yellow wash to the throat and silvery grey crest. Juveniles are the same as adults underneath but the upper parts are dark brown with white spots, a black hood, and the wings show a large rusty range panel which can be seen when perched.

Behaviour: In flight the Great Spotted Cuckoo can resemble a hawk with its long pointed wings and straight flight. It gets its name ‘clamator’ (screamer) by often calling when in flight. The Cuckoos diet consists of different insects but it specializes in consuming hairy caterpillars and larvae.

Breeding/mating (season, how and where): The Great spotted Cuckoo starts locating the nest where it will lay an egg as early as December, when the Crows only begin to build their nest. It watches from a hidden spot and follows the Crows so it will lay its egg just when the Crow will lay his. After the egg is in the nest the Cuckoo will disappear and continue to another victim in a different location, When the chick is hatched it will stay in the nest with the crow's chicks and share the food with them.

Threats and hazards: Most threats will come from habitat destruction.

Similar species not to be confuse with: Common Cuckoo is a slightly smaller bird with uniform grey wings and barred underparts.

Cool facts: Though the great spotted cuckoo is associated with parasitism (laying its eggs in other birds' nests such as crows and starlings), only half of the known cuckoo species are connected with this. The others make their own nests, incubate and rear their own young. In Palestine the Great spotted Cuckoo parasites the Hooded Crow.