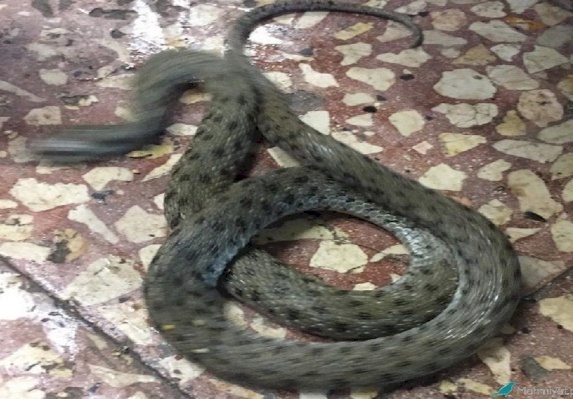 The Dice snake belongs to the Colubridae family in the Squamata order (suborder Ophidia).  A diurnal non-venomous snake, one of many belonging to the Colubridae family that are present in Palestine. Adult length can reach 1 m (body + tail). The Dice snake has a variety of colors: brownish, grayish and greenish. The back is covered with small dark spots which form a unique pattern. The ventral side is bright of yellow checkered with dark spots. Head scales are larger than those on the body. The eyes are relatively large. Mating season is during the spring and early summer. The female lays 10-30 eggs in a single clutch during July, which hatch two months later. Since it is an excellent swimmer and can remain for long times under water if need be, it feeds mostly on amphibians and their tadpoles. Its diet includes also fish, rodents, small birds and small reptiles. It is a harmless snake, which in danger usually does not bite and tries to escape. If it fails to escape, it releases a foul-smelling excretion. It inhibits the Middle East, eastern and parts of central and southern Europe, parts of Asia, as well as some of the former Soviet Union.

In Palestine: it lives in a variety of Mediterranean aquatic habitats and can be usually found near stagnant water resources.