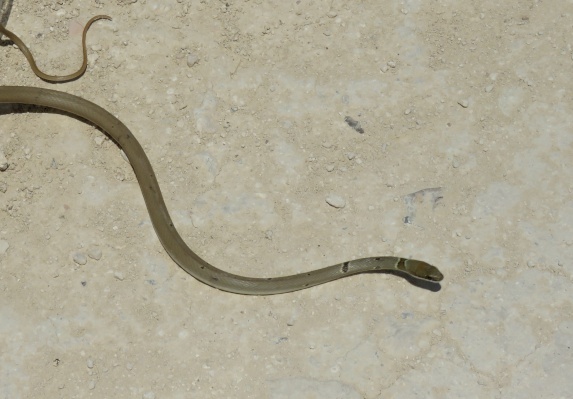 The Red whip snake belongs to the Colubridae family in the Squamata order (suborder Ophidia). A very common non-venomous snakes, one of many belonging to the Colubridae family, that are present in Palestine. The adult length can reach 1.15 m.
An agile diurnal thin snake. The body color is brown or greenish grey. The dorsal side of the head is brown-reddish and the ventral side is bright. The nape of the head is with a dark band with light borders. The body is covered with dark dots, which gradually disappear downwards. A black stripe joins the nostril with the base of the jaw. The Red whip snake can be frequently found under rocks and shelters above the ground. When caught, it is quick to bite, sometimes releasing a white foul-smelling excretion. The mating season is during spring. The female lays eggs during the summer, which hatch 2 months later. The diet consists of mostly lizards. It ambushes its prey, detected from a distance by its highly developed vision. The snake hunts by actively pursuing its prey. It is an excellent climber and ca be often encountered in human residences. It inhibits the Middle East, Iran, Iraq and Turkey.

In Palestine: it can be found in a variety of Mediterranean habitats.