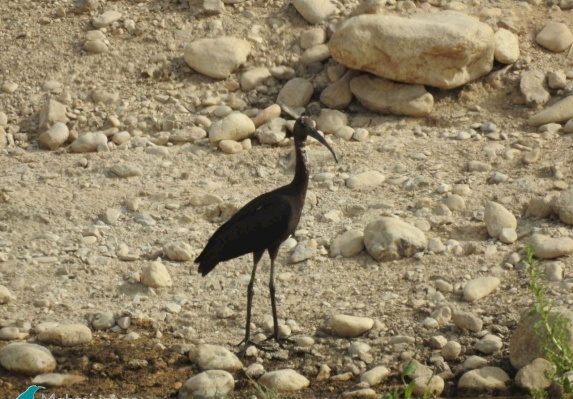 The Glossy Ibis belongs to the Threskiornithidae family in the Ciconiformes order. It is 55-65 cm in size and 485-580 grams in weight. It is a medium sized bird with a long thin neck, long legs, and a long beak that curves down. The body is dark brown, the wings have a metallic green shine, and there are white dots on the neck. The legs and beak are reddish-brown. In summer the brown color turns redder, especially in the neck area and the eye-bridge turns blue with a white border. In flight the Ibis appears to be uniformly brown colored. The neck and beak are extended as well as the legs in the back and the rounded wings are held downwards. The flight appears somewhat mechanical, with wingbeats interspersed with short glides. The Glossy Ibis usually flies in well organized flocks in a V-formation and the flocks in flight can be mistaken for Cormorants; however the extension of the legs behind the tail and the long beak are distinguishing characteristics. The Glossy Ibis is similar to the Bald Ibis but the later one has a more compact build and its legs don’t extend past the tail. The preferred habitat of the Glossy Ibis is shallow marshes where it wades while feeding on invertebrates, insects, amphibians, and fish that it catches in the muddy bottom. It can sometimes be found in sewage ponds and cowsheds. The Glossy Ibis can often be found breeding in colonies mixed with Egrets. It breeds on high trees such as Eucalyptus and Pine. It  can be found in southern Europe, the Mediterranean basin, Central Asia, Australia and North America, where it is spreading since its introduction in the 19th century. In Europe the population has been declining due to hunting, the use of insecticides in agriculture and the changes in their natural habitat due to development.

Migratory behaviour: In Palestine the Glossy Ibis is a common resident breeder and winterer.