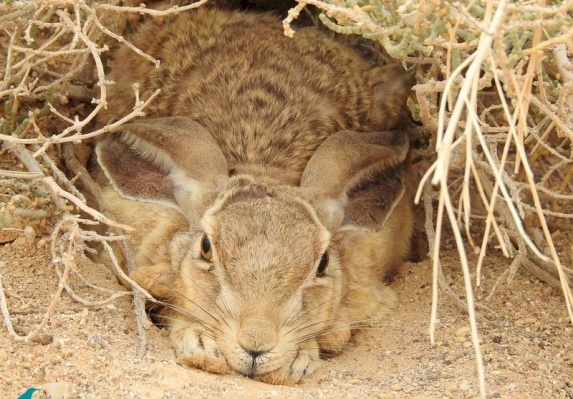 The cape hare, also known as brown hare, belongs to the leporidae family in the lagomorpha order. It is identified by its desert brown color, long ears and big rear legs and its fast hopping movement. The long ears, indicating that the hare has good sense of hearing, is a very distinguishing indicator and no other small mammal has ears that big in relation to its body size. The cape hare is a nocturnal herbivore (eating plants), although it can be seen also during different hours of the day, usually depends on the presence of predators and human activity. It feeds of grass, mostly annual herbaceous plants, and shrub leaves, depends on the habitat. It is mostly found in open habitats with shrubs to find shelter under, but can also be found in the outskirts of a maquis (Mediterranean forest) or in planted pine forest.The populations of the species are effected by human expansion and threatened by overgrazing, agriculture and urbanization processes, yet there seem to no dramatic decline in numbers and population density, perhaps due to high birth rate (can get up to 6-8 litters a year of 1-2 young each litter) in some cases. Poaching in most areas around the middle east is also a major threat to the populations and it is important to remember that in most countries, the hare (like most of other mammals) is protected by law. The cape hare can be found around the Arab peninsula and east towards western India, northwards up to Syria and Lebanon, an isolated population in Cyprus, northern and sub-Saharan Africa and also some populations in South Africa.