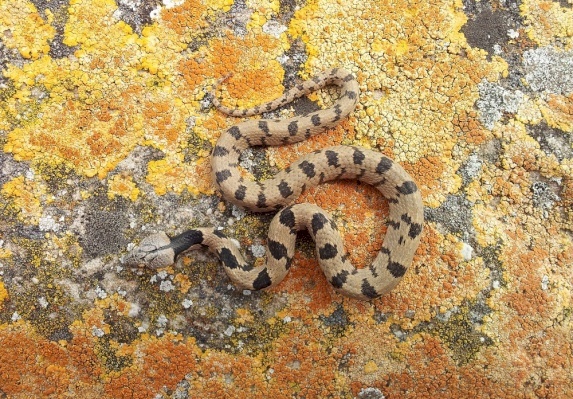 The European Cat Snake belongs to the Colubridae family in the Ophidia (snakes) sub-order of the order Squamata (scaled reptiles). It is one of several back-fanged ("semi-venomous") snake species present in Palestine, reaching a maximum total length (body + tail) of 80 cm. The European Cat Snake is usually well camouflaged, matching the background of its natural surroundings. There is great variation in the coloration and the markings on its body among individuals. There are dark markings on the back, on a background color of tan, gold, grey or light brown. The markings sometimes resemble coins, or blotches, or cross-bands. Its name is derived from the fact that the pupils of its eyes are vertical slits, as are the pupils of cat's eyes. This is usually considered an adaptation to night vision, and indeed the European Cat Snake is active at night (nocturnal). It is an excellent climber, often found climbing rock walls, trees and cliffs. The diet of the European Cat Snake consists of mainly of lizards; the young snakes also eat invertebrates. It is oviparous (the young hatch from eggs), hatchlings usually appear during late summer and early autumn. Despite its venom, it poses no known threat to humans, and is beneficial to man, by devouring various insect pests. The European Cat Snake inhabits Turkey, parts of the Middle East and Asia.