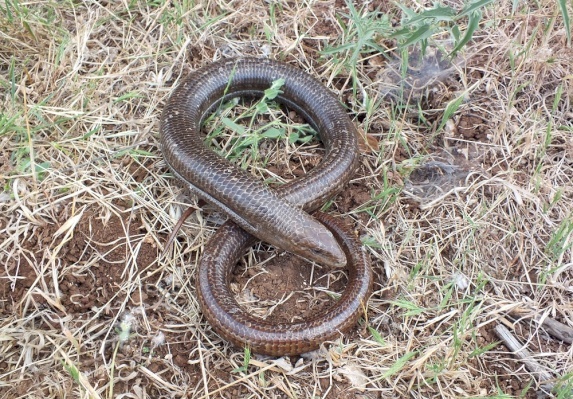 The European Glass Lizard belongs to the Anguidae family in the Sauria (lizards) sub-order of the order Squamata (scaled reptiles). It is the largest of the three limbless lizard species present in Palestine, reaching a maximum total length (body + tail) of 120 cm. The European Glass Lizard is the only representative of the family Anguidae in Palestine. These lizards possess a layer of "armor" under the skin, consisting of bony plates, making them very tough. This probably protects them from both thorns as well as natural enemies. Its name is derived from shiny appearance, in direct sunlight one may imagine the lizard is made of glass. The young are camouflaged with dark brown cross-bands on a light tan or olive background coloration. Adults are usually uniform brown or tan colored, sometimes with colorful blotches on the back and neck. The diet of adult European Glass Lizard consists of rodents, lizards, snakes and snails (the latter perhaps as a source of water). The young eat invertebrates and small vertebrates. It is oviparous (the young hatch from eggs), hatchlings usually appear during late summer and early autumn. Due to the fact that it is limbless, the European Glass Lizard is often mistakenly identified as a snake, and unfortunately persecuted and killed. This is most misfortunate, since they are harmless and quite beneficial to man (just as snakes are), as they are predators of creatures that man considers pests. The European Glass Lizard inhabits Southern Europe, Turkey and parts of the Middle East.