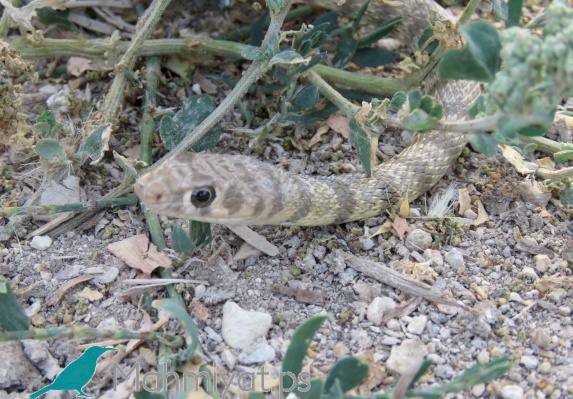 The Braid Snake belongs to the Colubridae family in the Ophidia (snakes) sub-order of the order Squamata (scaled reptiles). It is one of more than one dozen non- venomous snake species present in Palestine, reaching a maximum total length (body + tail) of 110 cm. The Braid Snake is very thin and elongated, and the front (anterior) portion of its body is covered by dark cross bands on a light background color, these fade towards the tail. It is very swift in movement, capturing its prey at lightning speed. It is an excellent climber, often seen climbing shrubs, trees and cliffs or walls with great skill. The diet of the Braid Snake consists of small vertebrates; namely, rodents, lizards and passerine birds. It is oviparous (the young hatch from eggs), hatchlings usually appear during late summer and early autumn. Completely harmless to humans, the Braid Snake is beneficial to man, by devouring various pests especially rodents. The Braid Snake inhabits parts of the Middle East and western Asia.

Conservation status – "data deficient" (DD), due to the fact that this species has only recently been described in the literature and separated from another similar species.

In Palestine – Sporadic, relatively rare, in most Mediterranean and semi-arid ("semi-desert") habitats.