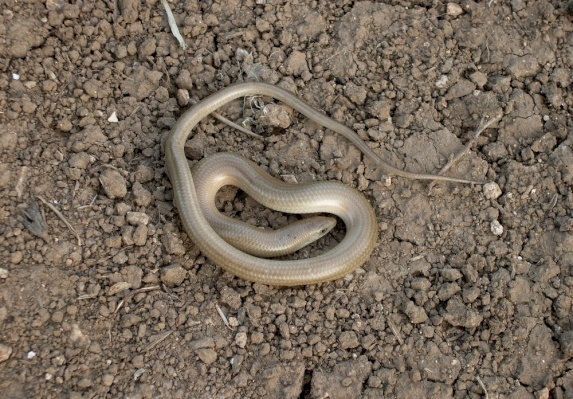 Günther’s Cylindrical Skink belongs to the Scincidae family in the Sauria (lizards) sub-order of the order Squamata (scaled reptiles). This is one of three limbless lizard species present in Palestine, reaching a total length (body + tail) of 40 cm. Günther’s Cylindrical Skink has remnants of external limbs, represented by a pair of small stubs just behind the head and another pair near the vent (cloaca) of the animal. Günther’s Cylindrical Skink is active during daytime (diurnal) and is very swift moving, usually preferring open habitats dominated by grassy vegetation. Its diet consists of small invertebrates, mainly insects. It is viviparous (the female gives birth to live young), the young appear usually during late summer and early autumn. These skinks have the ability to shed their tails when threatened by predators, and later a new tail grows (regeneration). It is quite common to observe skinks with missing or regenerated tails, evidence of “close calls” with predators. Due to the fact that it is limbless, Günther’s Cylindrical Skink is often mistakenly identified as a snake, and unfortunately persecuted and killed. This is most misfortunate, since they are harmless and quite beneficial to man (just as snakes are), as they are predators of creatures that man considers pests. Günther’s Cylindrical Skink inhabits parts of the Middle East.

In Palestine – Common in open Mediterranean habitats and some semi-arid or “semi-desert” habitats.