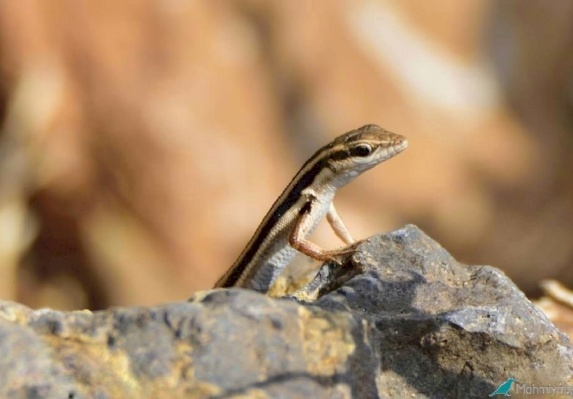 Rüppell’s Snake-eyed Skink belongs to the Scincidae family in the Sauria (lizards) sub-order of the order Squamata (scaled reptiles). The smallest member of its family in the Middle East, and the second smallest reptile species in Palestine, reaching a total length (body + tail) of just 9 cm. Its name is derived from the fact that it lacks eyelids, its eyes are covered by transparent scales, as are the eyes of snakes. Its minute size allows the Snake-eyed Skink to melt away into the leaf litter on the ground of its natural surroundings. The diet of the Snake-eyed Skink consists of small invertebrates. It is oviparous (the young hatch from eggs), the hatchlings appear usually during late summer and early autumn. The tails of hatchlings are reddish or orange colored; this is considered an anti-predator strategy: the tail supposedly averts the attention of visual predators away from the head and body. These skinks have the ability to shed their tails when threatened by predators, and later a new tail grows (regeneration). It is quite common to observe skinks with missing or regenerated tails, evidence of “close calls” with predators. In spite of its modest size, the Snake-eyed Skink is an important species in many Mediterranean ecosystems, both as predator and as prey of larger predators, for instance larger lizards . The Snake-eyed Skink inhabits parts of the Middle East.

In Palestine – Common in all Mediterranean habitats and in most semi-arid or “semi-desert” habitats.