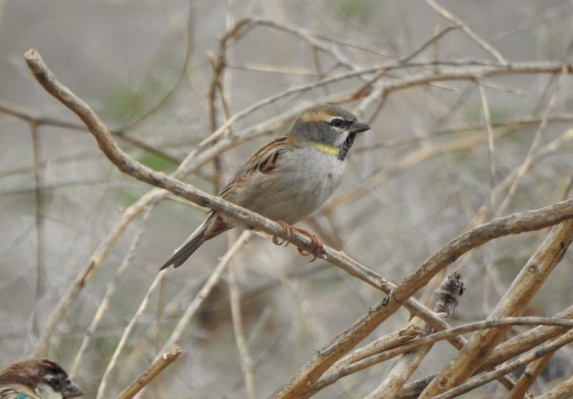 A small bird with a gray head and black throat, the females look relatively clean compared to the males. It breeds in trees and bushes where it builds a large, prominent nest that has thermoregulatory properties unique to hot climates. Partial and short-distance immigrant; Moves in tight, fast-moving flocks. It relies on flying for transportation.

There are species of it that breed in parts of the Middle East, and another in western Afghanistan and eastern Iran. It has a length of 12-13 cm and is one of the smallest species in its family, about 4 cm shorter than the widespread house sparrow. Males are brighter and more distinguished than females. The male Dead Sea Sparrow has a gray crown, hind neck, and cheeks, upperparts striped reddish-brown, and underparts greyish-white. The female looks like a small house sparrow, with a brown-striped back, gray head, and yellowish-white underparts. It is paler and smaller than the house sparrow, sometimes appearing yellow on both sides of the neck. This species was first recorded on the island of Cyprus in 1973 and was bred a few years later. Although changes in habitat reduced the size of this group soon after it was believed that small numbers were still breeding in Cyprus. This species is migratory or dispersed far from its breeding season. The eastern subspecies are winterizing in western Pakistan, but the usual wintering areas of the western subspecies are largely unknown. A winter search for species close to their western breeding range finds only scattered swarms. It is possible that they disperse more widely in winter, with more herds being found in winter in the south and east than they breed in, including in the United Arab Emirates and Saudi Arabia.

This bird is endemic in Palestine, especially in the Dead Sea region. There is a variation in latitude in wing length and body mass, as individuals in northern Palestine have longer and heavier wings than those in the south, perhaps due to the bird's ability to adapt locally. This species feeds mainly on seeds, like other sparrows. It breeds in dry lowlands with some shrubs, they build a nest in a tree, and the female lays 4-7 eggs.