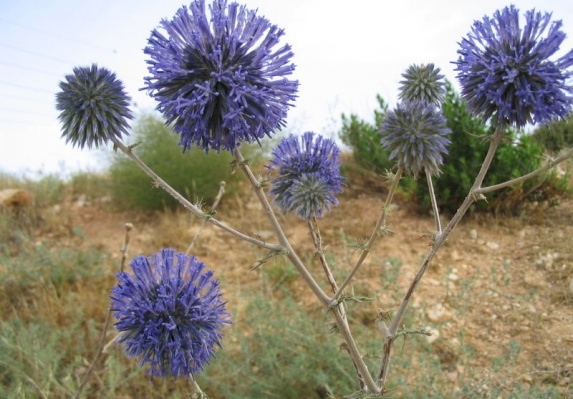 Echinops adenocaulos This is a Middle Eastern perennial species of plant from the family Asteraceae, native to Palestine and wider area, Jordan, Syria and Lebanon. However, this species was newly recorded for the Turkey. In Palestine wider area, this plant can be easily found.

This present species of globe thistle can live in any well-drained soil and will survive in poor, dry soil. Echinops adenocaulos has erect stems that are 50-80 cm high, sometimes reaching up to 120 cm, covered with white hairs and purple bristles. The leaves are rosette, alternate, twice or more dissected, spinescent, densely hairy on the underneath. The upper leaves are sessile and ovate. The spherical flower heads are 4-6 cm diameter, aggregate in a bluish-violet capitula inflorescence of 25-30 mm long.

The fruits are simple, comprising one seed only and covered with long straight hairs. Echnops adenocaulos produces a high amount of nectar. Thereby it is pollinated by insects, especially by bees. Interestingly, a study showed that E. adenocaulos is adapted to survive under heavy and very heavy grazing pressure, as its buds are buried near the soil surface and most of their shoots desiccate in summer. Furthermore, their persistence is also associated with the development of physical defences, such as spikes spiny leaves.

Last but not least, a recent study with Palestinian wild plants showed a high antibacterial effect of E. adenocaulos against Sreptococcus pneumonia, which is a dangerous and multidrugresistant species of bacteria affecting the respiratory system.