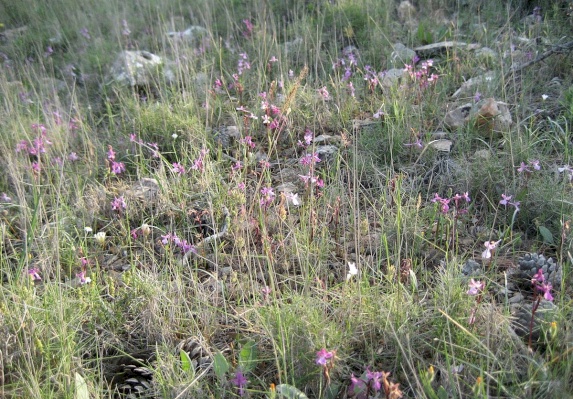 A common perennial of the Orchidaceae family that can grow from 15 to 40 cm tall. In the winter a rosette of leaves with purple-brown spots grow at the base before the inflorescence of 7-15 flowers that bloom in spring.

The bright purple flower has an outer whorl of 3 sepals similar in color to the inner whorl of three petals. The inner middle petal forms a lip attracting insects. The lip is convex with a pale central band dotted with small red dots.

In the center is a single column composed of the male stamens united with the female style. The pollen is transferred in clusters called pollinium. The ovary is composed of three carpels forming three ridges on the outside of the seed pod. The ovules are arranged along these ridges inside the ovary. The flower has a spur pointing upwards with no nectar

Germination is dependent upon the presence of a fungus which apparently is essential for nutrient absorption.

Flowering period: It flowers from March to April.

Ecology: It is found in shrublands and woods, on soils of terra rosa and rendesina. Usually the plants are found in patches, possibly determined by the dispersion of the fungus.

Distribution in Palestine: Is found in the mountains of Nablus and Hebron. In the past it used to be common, but over grazing and change in land use made it rather scarce.