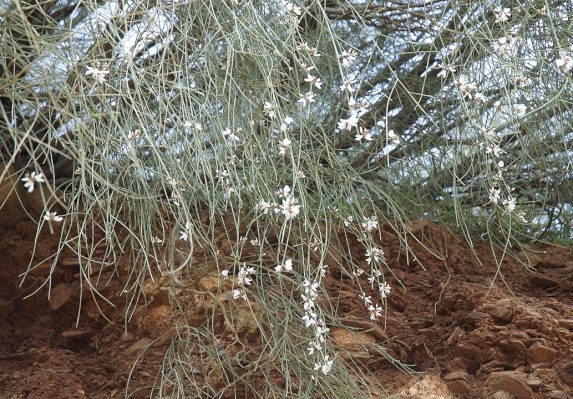 Lygos raetam Known by its English name White broom, this perennial shrub plant from the family Fabaceae is native to North Africa (Algeria, Egypt, Marroco, Tunisia) and Western Asia (Palestine and wider area, Jordan, Lebanon, Syria, Libya). However, it was introduced in Australia. It is found in sandy soils of the Mediterranean wood and shrublands, steppes, deserts and extreme deserts.

Lygos raetam grows up to 2 metres high, with green grooved branches from the base, erect stems, but they may also spread reaching 6 m across. The leaves are alternate, entire, about 5 mm long and narrow, quickly dropped, so the plant remains leafless for most of the year. The flowers are white, pea-like, appearing close to the stems in racemes inflorescences of 3–15 flowers.

Each flower tube contains ten stamens and the flowering time is from February, up to May.

The fruits are one or two seeded pods, which do not open when mature, but fall on the ground. The fruits and flowers of L. raetam are food resources for goats. Additionally, from the stems one may produce charcoal. The charcoal made out of this plant was found in ancient human settlements from the Iron Age, dating from the 12th to the 9th century B.C. Another important use of L. raetam is by the Bedouins, who boil the leaves of white broom in water, using it to wash wounds and inflammations.

Furthermore, animals are made to drink this brew as a medicine against brucellosis. Another very interesting use of white broom is at Bedouin marriages, when they use white broom to decorate the entrance of the tent, with a meaning that the plant brings fertility. In a recent study, moreover, the alkaloids compounds of L. raetam were investigated and discovered to be effective antimicrobial agents that can be used against infectious diseases caused by many pathogens.

These compounds were especially effective against the bacteria Pseudomonas aeruginosa and Escherichia coli, which are bacteria that have developed mechanisms of resistance to common antibiotics. Lygos raetam has then the potential to be an important natural antibiotic.