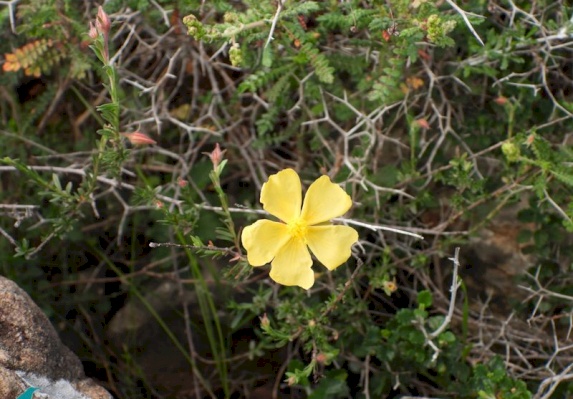 Fumana arabica is a small genus containing 20 species that are native to Europe and Mediterranean, belonging to the family Cistaceae. Fumana Arabica is a perennial plant species known by its English name Arabian cistus or Mediterranean rock rose.

This species is widespread and commonly distributed throughout the Mediterranean basin, from South Europe (Italy, Malta, Greece, Albania, Bulgaria), North Africa (Tunisia, Algeria, Morocco) towards Eastern Asia and Middle East (Sinai peninsula, Palestine and wider area, Iran, Iraq, Oman, Jordania, Lebanon, Saudi Arabia and Syria). In addition, in some parts of Palestine this plant is rare, but in other parts is commonly distributed.

Arabian cistus grows well in rocky and sandy soils. Fumana arabica is a shrublet (small shrub, also known as dwarf shrub) with prostrate and ascending stems, much branched that reaches up to 30 cm. The leaves are alternate, elliptic to lanceolate, and the upper leaves are glandular-hairy. The solitary or loose racemes flowers have 5 yellow symmetric petals with pale orange marks at the base. The corolla is 20-30 mm in diameter and the fruits that contain up to 12 seeds, are globose-ovoid capsule measuring 6-8 mm, with some short hairs at the tip.

Fumana arabica is from March to May in blooming.