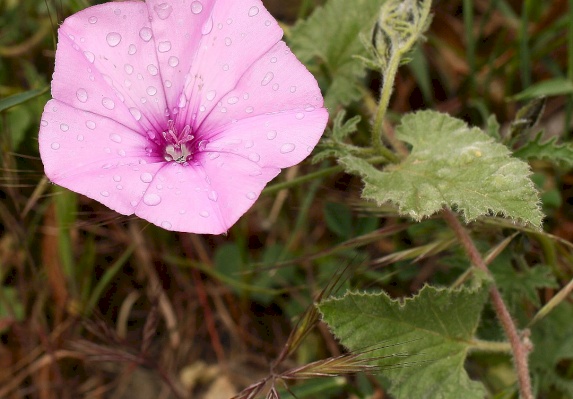 Convolvulus althaeoides Plants of the family Convolvulaceae (includes more than 1600 species), such species of the genus Convolvulus are, in general, commonly known as morning glory. However, the species

This plant grows well in habitats like woodlands and shrublands, steppes, extreme deserts and deserts. Convolvulus althaeoides have hairy stems growing up to 15 cm height, climbing and trailing on any substrate that may serve as support. Twisting, the stems grow and spread indefinitely. The flashy, solitary flowers are pink or violet coloured, with long peduncles. The fused five petals flower has a funnel (trumpet)-shaped corolla, three or four centimetres wide.

The flowering time ranges from March to June.

The leaves are alternate and deeply divided into narrow, finger like lobes. The fruits form capsules. Mallow-leaved bindweed tolerates drought and is also commonly found in gardens, fences and roadsides, vacant lots, surrounding and through crop fields, as well as in pasture. Hence, due to its high habitat plasticity and drought tolerance, this plant is easily found in the places where it is distributed.