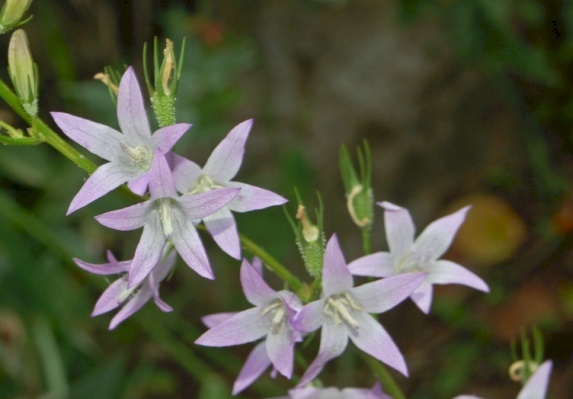 Campanula rapunculus is present in western Asia, northern Africa and in most of Europe, except Norway, Iceland and Ireland. This species is also commonly distributed in most parts of Palestine wider area. In addition, the rampion bellflower has been introduced in southern Sweden, Denmark and Great Britain.

Rampion bellflower has erect stems measuring 40–80 cm height that are lightly pubescent and branched on the top. Its leaves are alternate, elongated and have slightly toothed margins. The flowers are lightly purple/blue, about two cm long, hermaphrodites, distributed in a racemose inflorescence and the five petals are folded in a tube/bell like, till short before the top of the corolla. Hence the top of the corolla is opened and the petals culminate to a five tips.

The flowering period ranges from April to June and can be extended to September in some areas. The flowers are pollinated by insects, especially by the bees of the genus Chelostoma. The fruits are ellipsoid capsules that produce several seeds.

Last but not least, this species was once a very important feeding resource, being widely grown in Europe for its edible leaves, which were used like spinach, and its roots, that look like a small turnip, was used like a radish. Furthermore, the tale “Rapunzel” from the Brothers Grimm took its name from this plant.