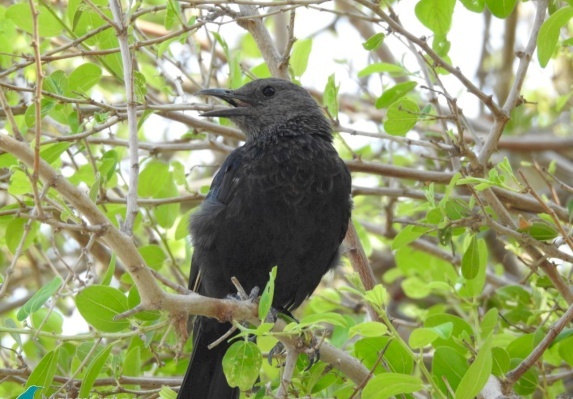 During the flight, the wings of this bird show large and wide orange stripes. Males are shiny black while females are generally brown. Found in small or medium flocks, it feeds on fruits, seeds, and arthropods.

This starling can be seen along the Dead Sea and southern Jordan, where they live in hills and rocky valleys, but they also wander more widely and often reach cities and villages searching for food. The distinctive orange stripe and raucous call make them easy to spot in Feynan Valley. The bird was named after Henry Baker Tristram, founder and original member of the Union of British Ornithologists. The Bedouins  note the bird's taste for fruits, especially figs, dates, and olives. Tristram starling can be seen stooping on top of camels or donkeys, removing ticks from the animal's skin.

The original home of this starling is the Mediterranean region, where it is found in the regions of Palestine, Jordan, Egypt, Saudi Arabia, and Oman, and it nests mainly on the faces of rocky cliffs. It has a length of 25 cm, a wingspan of 44-45 cm, and a weight of 100-140 g. Males have shiny iridescent black plumage with orange spots on the outer wing, which is especially visible in flight. The beak and legs are black. Females and young birds are similar, but duller, with a greyish heads.