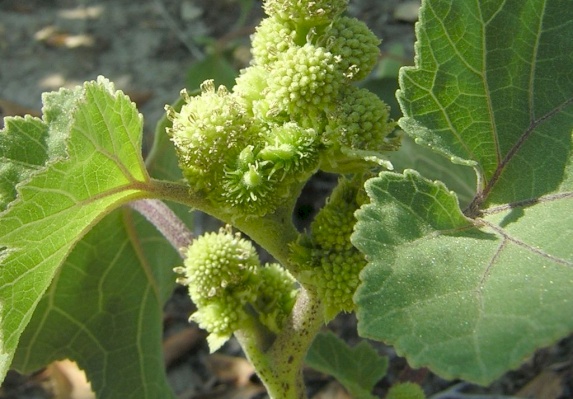 By No machine-readable author provided. Aroche assumed (based on copyright claims). [CC BY-SA 2.5], via Wikimedia Commons

This member of the Asteraceae family, also called rough cocklebur and Sheepbur, is an annual invasive species from tropic America. This branched plant has short bristles covering all surfaces that give it a feeling of sandpaper. The large triangular leaves are lobed and dentate.

The connate flowers, both male and female, are carried on each individual plant. The male flower is found on a peduncle in the axil of the highest leaves with the female inflorescence below, containing two flowers, with no peduncle. The flowers have no calyx and are pollinated by wind or self-pollination.

Flowering period: It flowers throughout the summer, from May-September. The fruit is an egg-shaped, 1/5-2 cm, cluster of bracts envelope the flowers which become achenes. It is covered with hooked spikes that dry to form a burr, perfect for catching on to clothes and animal fur. There are short glandular hairs at the bottom of the spikes.

Ecology: It is found near riverbanks, fouled bodies of water, and swamplands as well as near garbage dumps and roadsides. Where it is found, very little diversity of other flora can survive as it grows very fast and completely covers the ground. Birds usually avoid the habitat where it is found as it does not attract many insects.

Common and medicinal uses: Its sap is used as a treatment for malaria, problems of the urinary tract, and as a sedative. The seeds and seedlings contain carboxyatratyloside which can be toxic in large quantities however the adult leaves have been shown to contain antimicrobial substances with no carboxyatratyloside

Distribution in Palestine: It is common along water streams that get flooded occasionally in lowlands and shallow riverbeds in the mountainous areas.