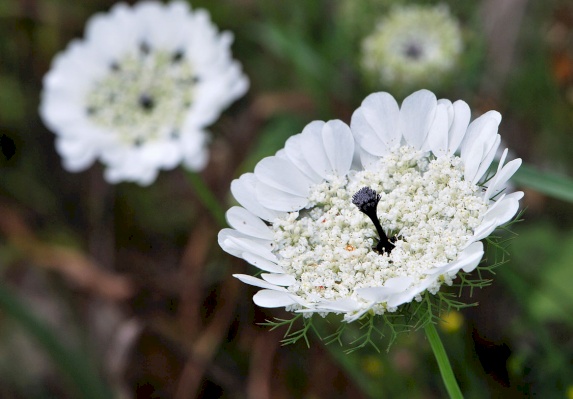 A large annual plant of the Apiaceae (Umbelliferae) family that is common throughout the Mediterranean area. It grows to a height of 40 cm but has a large (5-10 cm in diameter) flat round flowerhead composed of an umbel of small tightly clustered flowers surrounded by flowers with exterior petals 5-7 times the length of the interior petals, and almost completely dissected. Each flower has the five petals and sepals characteristic of this family. In the center of the flower there is often a cluster of dark, infertile flowers that resemble an insect in appearance and apparently attract potential pollinators such as wasps, flies, and beetles.

The large, alternate leaves are so compound and pinnate that they are lace-like.

Flowering period: It flowers in the spring, from March to May. Pairs of the flat seeds are enveloped in wing-like tissue with lobes that form a toothed wheel shape.

Ecology: It is found in abandoned fields and meadows, preferably in heavy soils. When Flowering it attracts many insects that also bring birds like the Graceful Prinia who feeds on them. The tall flower is also commonly used as a perch for singing Prinias that like to nest on its stems.

Common and medicinal uses: Extracts from the crown flower have been shown to contain antioxidants and enzyme inhibitors.

Distribution in Palestine: It has a wide distribution; It is very common in Mediterranean habitats and lowlands. It is Quite common in the upper Jordan valley, the mountains and desert of Samaria, and Judea and can be found in moist habitats in the Dead Sea valley.