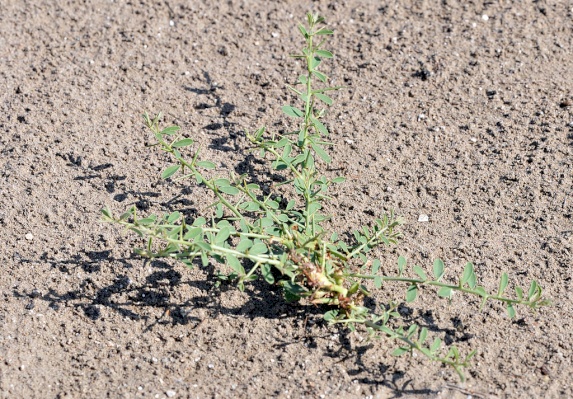 A perennial shrub of the Fabaceae (in the past Papilionaceae) family. It grows to a height of 50-80 cm in Irano-Turano regions but invades Mediterranean and Sudani regions, particularly as a weed in agricultural fields, usually in heavy salty soils. The stems branch out to short thorny stems. The small (up to 2 cm) ovate leaves are simple and entire.

As characteristic of this family, the red-burgundy flowers (one cm In length), have five petals and are structured like a sailboat: the outermost upper petal is the largest like a sail, two petals form the sides and two petals unite to form the "bottom". Of the ten stamens, 9 are united.

It dries up in winter and sprouts again in spring.

Flowering period: It flowers in the summer, from May to September. Pollination is by insects and the fruit is a pod with 2-8 seeds, 2-3 cm in length.

On the leaves may be found sugar crystals deposited by aphids.

Ecology: It is usually found in heavy soils and saltmarshes and deserted fields in Mediterranean lowland habitats as well as springs that create year round moisture in the desert.

Common and medicinal uses: An infusion from the roots is commonly used as a folk remedy for problems of the urinary tract, digestive system as well as a remedy for kidney stones.

Distribution in Palestine: It is found mainly in the low areas in Nablus and Hebron mountains (less common on the higher habitats), as well as the Dead Sea valley near springs and other water sources or wet soils.